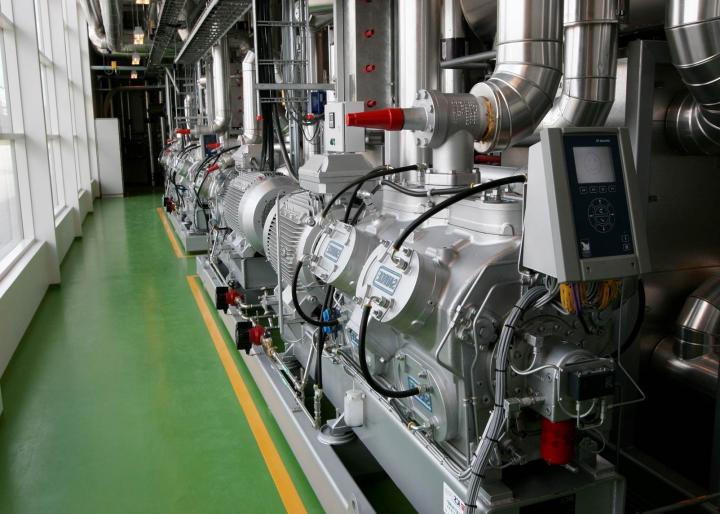 For decades, the Danish solar district heating sector has been a shining example for the world. And with the help of combining heat pumps with solar thermal, the market could again lead the way by contributing to Denmark’s 2030 aim of a 70 % carbon emissions reduction. Hence the question asked by Geoffroy Gauthier, of Danish consultancy Planenergi, during the first project meeting of IEA SHC Task 68 – Efficient Solar District Heating Systems this April: “Are heat pumps competitors or teammates in district heating?” According to his presentation, combining the technologies will be a win-win for everyone involved considering that hybrid systems reach high renewable energy shares and make investors less dependent on raising electricity prices. A recent example of this is the Præstø Fjernvarme example which includes a 6 MW collector field, air-source heat pumps with a total heat capacity of 2.9 MW, a 1 MW pellet boiler, and a 3 MW electric boiler. According to the utility’s website, as much as 92 % of the heat supply generated by this project has already been carbon neutral.
Photo taken from Danish Energy Agency website

In 2020 and 2021, heat pumps and solar thermal systems took very different paths in terms of how much capacity was put up for Denmark’s district heating grid (see the following chart). As Gauthier pointed out, at least 300 MW of heat pump capacity was added in the last two years – but just 15.8 MW of new solar thermal capacity. One reason for this was the government’s uneven policy support. In July 2019, solar heat ceased to be eligible for the energy savings mandates that heat utilities had to fulfil. Heat pumps, on the other hand, continued to benefit from the need for offsetting utilities’ mandates until 2020. In addition, one of the taxes levied on electricity usage was near zero for heat pumps. Grants were offered too, covering up to about 15 % of the cost of installing a heat pump. Apparently, these policies were enacted to prioritise renewable electricity usage for heating, as Denmark is one of the countries with the highest wind power production globally. 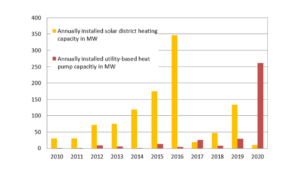 This year’s funding by the Danish Energy Agency has resulted in a more balanced approach to supporting both technologies. While last year, only heat pumps were funded, the July call for applications has allowed submissions for both electric heat pumps and solar thermal systems, with a deadline of 31 October 2022. As in 2021, Danish Krone (DKK) 52.1 million (about EUR 7 million) has been made available for the support scheme. At the same time, however, the Danish Energy Agency has tightened the requirements for submissions (see the following table).

Gauthier added that heat pumps should not necessarily be viewed as a threat to solar district heating. To achieve high shares of renewable district heat, solar thermal could be combined with heat pumps as part of different operation modes based on grid needs. He went on to mention four possible modes that would warrant further investigation in the near future:

In addition, the Danish district heating association has supported the creation of a heat pump database https://varmepumpedata.dk/ in the same way it helped set up the online database for solar thermal systems https://solvarmedata.dk/, by listing individual plants and publishing current and cumulative performance data on the web.

An important function of these publicly available maps of existing projects is that investors can look at real-world data gathered from operational systems. The solar thermal database has generated a great deal of investor confidence in the collector technology. A few of the pumps listed at https://heatpumpdata.eu/, which currently shows data on more than 100, also include real yields for an entire year, as well as their coefficient of performance (see the table below). More performance data will be added in the coming weeks.

Systems for which the new heat pump database lists operational data going back more than a year Source: https://heatpumpdata.eu/