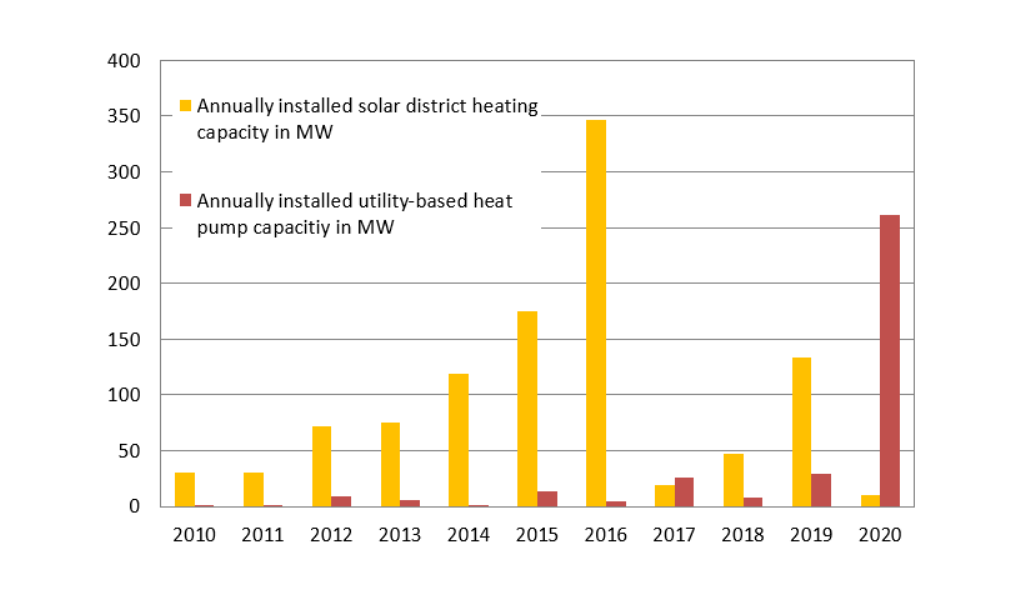 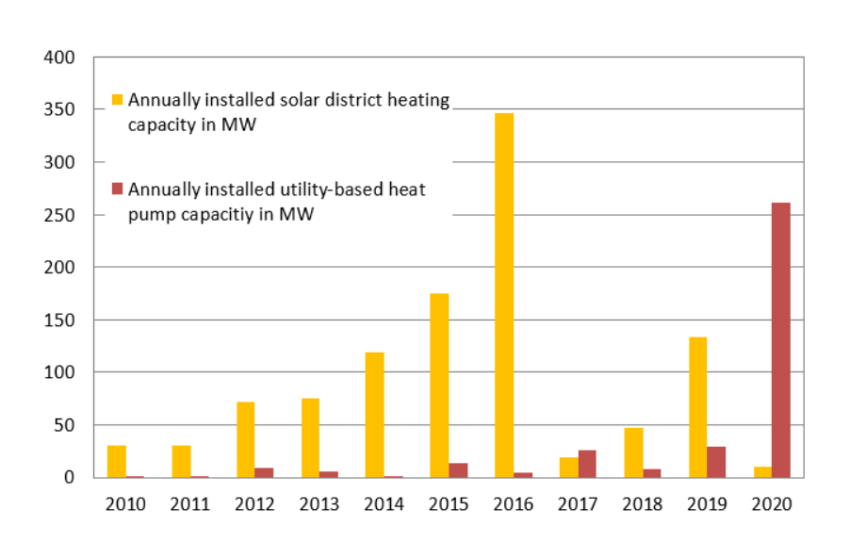 United in their drive to get rid of fossil fuel-fired heating, Denmark’s district energy providers spent years putting up a network of solar thermal systems, large ones in particular. But lately, priorities seem to have changed, with the focus now being put on heat pumps instead. Sales of pumps have dwarfed those of solar thermal equipment since 2020, when 60 large heat pump units providing a total generation capacity of 250 MW were started up across the country. This seismic shift in the Danish market is the result of low electricity prices for businesses and a new support programme favouring heat pump technology.
Source: Planenergi
Until 2016, Denmark was known as the country that both pioneered and continued to play the lead role in SDH installations around the globe. In that year, the combined capacity of large solar thermal plants grew by 350 MW nationally. And in 2019, a year before SDH sales collapsed, Denmark still saw 134 MW being added to the total. That changed in 2020, when newly installed capacity plummeted to 10 MW. The future of the market looks just as bleak, as the government’s latest incentive policy is placing an even greater strain on the sector’s competitiveness.
To explain: Not too long ago, a solar district heating system was considered a profitable investment in Denmark. Energy providers were able to count the amount of heat SDH systems produced towards their government-mandated energy savings targets. Businesses that failed to meet those targets had to purchase credits from companies exceeding theirs. Until 2016, energy providers could make use of the full amount of solar heat a system generated in its first year in operation. Many of them jumped at that last chance to profit from maximum credits, which quickly led to a boom in SDH. A year later, the amount was capped at 8,000 MWh annually. And in July 2019, solar heat became ineligible for the energy savings mandates altogether.
The same offset mechanism was in place for heat pumps too, although heat pumps benefitted from the mandates a year longer than solar thermal plants. This largely explains why so many pumps were installed in 2020.
But even without the extension, large heat pumps would have retained significant advantages over their solar thermal counterparts. In 2020, Denmark’s heat utilities paid the lowest electricity prices in all of Europe, about 0.06 EUR/kWh, according to Eurostat. Since the country imposes barely any fees and taxes on the electricity these companies consume, the levelised cost of heat produced by large heat pumps can be as little as 0.02 EUR/kWh, Jes Donneborg, of Danish project developer Aalborg CSP, told the German Solarthemen magazine. That is something current SDH systems, which can supply heat at a cost of 0.03 EUR/kWh, cannot match.
So when the heat utility in Saltum recently asked Aalborg CSP to integrate a new system into its DH grid, it chose an air to water heat pump – even though Saltum was the first business to have an SDH system installed in Denmark 30 years ago. A sudden spike in maintenance costs forced the operator to say goodbye to its 30-year-old collectors.
Pump-only incentive scheme
Now that the Danish government has introduced a new support scheme for large heat pumps in the DH market, the technology is receiving yet another boost in sales. The new scheme, which took effect in March 2021, succeeds the credit mechanism, offering grants that cover up to 15 % of the cost of installing a pump. Although initially, the government also deliberated the inclusion of incentives for solar thermal and biomass, they aren’t part of the new law establishing the programme. While the Danish government stated that biomass does not meet today’s sustainability standards, it gave no reason for the lack of support for solar thermal systems. The overall aim seems to be the promotion of electric solutions: Wind power in particular is an energy source that the government wants to see used more frequently at home instead of being exported to neighbouring countries. Denmark’s approach has already had a devastating impact on its SDH sector. A good example of this is 2020’s shutdown of Arcon-Sunmark, once the global leader in SDH solutions.
Energy mix improves pricing
As for new SDH systems, Donneborg doesn’t expect any to be installed in Denmark in the next years. “We do offer solar thermal solutions. But our customers only seem to be interested in heat pumps right now,” he told Solarthemen. Still, he is acutely aware of the danger of putting all of one’s eggs in one basket. In Denmark, wherever DH operators use a mix of energy sources, including solar thermal, customers pay the least for heat. After all, “0.03 EUR/kWh is a good price,” said Donneborg.
As for the future of SDH in Denmark, Danish consulting firm Planenergi sees a fair chance the systems will make a comeback, even if a peak like in 2016 will most likely never be reached again. “I see some potential for larger systems or installations that provide higher solar fractions than current averages suggest,” said Daniel Trier, head of Planenergi’s office in Copenhagen.
Simply put, all is not lost. Imagine a couple of new market entrants that can supply solar heat at even lower costs and a Danish government that puts a greater focus on taxing emissions from electricity generation. This, combined with rising electricity prices, could certainly get the SDH sector back on track.
Translator: Björn Vrooman, solarthermalworld.org’s long-standing proofreader based in Germany