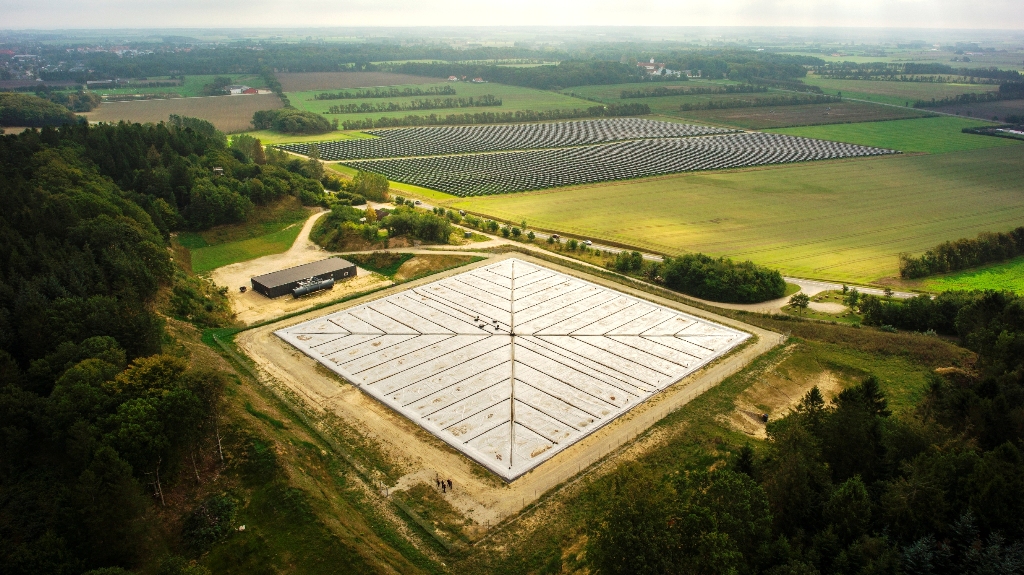 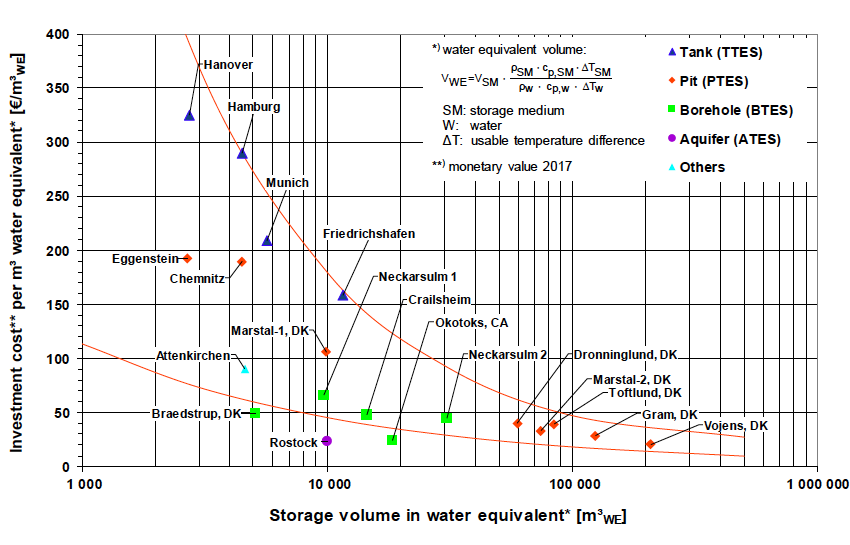 Denmark has had a successful learning curve regarding to the cost and efficiency of seasonal pit heat storage, which is used to store sunlight in summer for heating purposes in winter. Take Sunstore 3, for example, a 60,000 m³ pit heat storage system built at a cost of 38 EUR/m³ of storage capacity in the town of Dronninglund in 2014: It has now reached a storage efficiency of more than 90 %. These are some of the numbers Jan Erik Nielsen, a solar district heating specialist who works at Danish consultancy PlanEnergi, highlighted during the webinar Task 55: Towards the Integration of Large SHC Systems into District Heating and Cooling (DHC) Networks. The event, hosted by the International Solar Energy Society (ISES) in mid-March, was offered by the IEA Solar Heating and Cooling Programme as part of a series of Solar Academy webinars.
Photo: Dronninglund Fjernvarme
“In Denmark, we have a wealth of experience in pit heat storage construction, which is fairly simple,” Nielsen said. “You dig a hole in the ground and put soil around the edges. Then, you add a watertight liner at the bottom of the pit, fill the pit with water and put an insulating and floating cover on top.”
An increase in the size of these systems has brought down costs considerably, as the following table shows. Denmark´s first big (10,000 m³) pit storage demonstration system, built in Marstal, came to 67 EUR/m³. This made it nearly three times as expensive as today’s biggest seasonal storage, which was put up in 2015 in Vojens and cost only 24 EUR/m³. Nielsen suggests using a benchmark of around 30 EUR/m³ when calculating the cost of pit heat storage with a capacity of 100,000 m³ or more.
Seasonal heat storage is a very cost-effective way to make use of surplus electric power generated by wind farms in Denmark. “Wind energy has already contributed up to 40 % to electricity generation in a year and we want to combine this rich intermittent energy source with seasonal storage via heat pumps,” Nielsen said.
Key data on seven Danish pit heat storage systems. Figures are based on data points for 1998-2001 (pilot storage in Ottrupgård), 2013 (Marstal) and 2014 (Dronninglund).
Source: Technology Data for Energy Storage, March 2019 (see p. 46 of the attached PDF)
During the webinar, Nielsen gave three reasons why the efficiency of the Dronninglund seasonal storage is significantly better than that of the Marstal system:

Specific net investment in large thermal energy storage (includes pit construction costs, except for design, connecting pipes and equipment in heating centre)
Source: P. 109 of the attached HeatStore report / Solites
Most large pit heat storage systems can be found in Denmark, which has five above 60,000 m² (see the chart above). The first-ever pit heat storage outside Europe was commissioned in Tibet last year and has a capacity of 15,000 m³.
To compare pit and borehole storage, the volume of the latter is converted into water equivalent, as soil cannot take up nearly as much heat. For example, the 63,360 m³ borehole storage system built in Neckarsulm, Germany, holds only 10,000 m³ of water equivalent, according to the Solites chart shown above. But even much smaller borehole storage projects in Germany have already seen their cost drop below 50 EUR/m³, and they could be reduced further by building larger systems.
Organisations mentioned in this news article:
http://www.iea-shc.org
http://www.planenergi.dk
http://www.solites.de
http://task55.iea-shc.org
http://www.iea-shc.org/solar-academy
More information on seasonal storage:
Germany: http://www.saisonalspeicher.de
Denmark: http://www.varmelagre.dk
http://www.solites.de
https://solarthermalworld.org/wp-content/uploads/2019/05/heatstore_utes_state_of_the_art_wp1_d1.1_final_2019.04.26.pdf
https://solarthermalworld.org/wp-content/uploads/2019/05/technology_data_catalogue_for_energy_storage.pdf