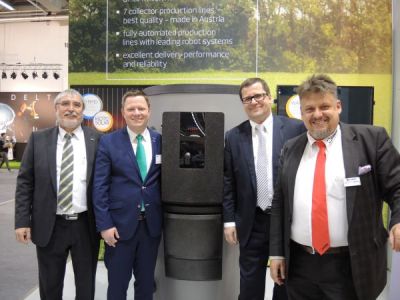 Managers from four different companies showcasing one innovation – a rare occurrence, even at a large fair like the ISH 2015 in Frankfurt. At the beginning of March, Rudolf Pfeil, CEO of Resol, Christian Beckmann, Sales Manager Key Account and OEM at Wilo, Günter Kohlmaier, CEO of Kioto Solar, and Karsten Pillukeit, CEO of Esbe Group (from left), jointly presented the newly developed fresh water module, Fresh Hydro, at the booth of Kioto Solar. Thanks to a patented temperature control, the fresh water module offers rapid response times without over- or undershooting. The developers have promised a comfortable showering experience at 40 to 160 litres per minute and a temperature of 45 °C. The fresh water system was one of a number of solar thermal innovations at the ISH which were worth taking a closer look.
Photo: Sun & Wind Energy / Tanja Peschel
The key novelty of the Kioto fresh water module is an ultrafast electronic mixing valve, which controls water flows much faster than the usual thermostat. According to Pillukeit, the new valve re-adjusts flows within 2.5 seconds instead of the, on average, 120 seconds required by systems nowadays. Other important features were the integration of the valve’s control system with the Resol controller software, as well as the compact design of pump and valve, which forms one unit in the fresh water module. The product will be offered by Kioto Solar and Esbe Group from July 2015 onward. A cascade version for larger systems has been promised for 2016 – again, as a unique masterpiece developed jointly by the four companies.
Absorbing layer switch avoids steam production in solar circuit
With great fanfare, Michael Beckmann, Product Manager Solar at Viessmann, presented the new Vitosol 200-F flat plate collector model with its newly developed stagnation temperature protection coating, SolProSelect. The switch in the absorbing layer is a purely physical process and changes the crystalline structure based on the collector’s operating temperature. Above 75 °C – 80 °C, emissivity will increase, so that the stagnation temperature is going to be 40 – 50 K lower than in today’s Vitosol 200-F collector. No steam will be produced in the solar circuit and the glycol will be protected from cracking. “We do not lose performance in the range of typical operation temperatures below 80 °C, and the changes in the crystals occur during an unlimited number of cycles,” Beckmann confirmed. There only has to be a slightly higher pressure in the solar circuit. According to the product manager, “the production costs of the new coating are just a tad higher than for the old one. There has not yet been a decision on a sales price.” The SolProSelect coating will be market-ready during the second half of 2015 and will become the standard within the flat plate collector offering of Viessmann.
Plug’n’play – four connectors integrate SolBox into solar system

Pre-fabricated hydraulic solutions which offer plug and play for the installer were trending at the ISH 2015. German OEM collector manufacturer STI Solar-Technologie-International showcased the SolBox, a compact and well-isolated unit which includes all components of the solar thermal circuit, such as controller, venting unit, pressure gauge, high-efficiency pump, expansion tank, safety valves and a filling unit, for collector fields of up to 35 m². “Since high-efficiency heat pumps will become standard, one person alone can set up the system, including the filling and venting, in the basement,” René Fiedler, Managing Director of STI, explained the advantages. He worked on the compact hydraulic solution for two years. “We offer the SolBox to solar thermal integrators, either for drainback or pumped systems, but with the same design,” Fiedler said. (Photo: STI)
More innovations in brief:
More information:
http://www.resol.de/index/index/sprache/en
http://www.kiotosolar.com/en/
http://www.sti-solar.de/index.php/en/
http://www.viessmann.com/com/en.html
http://www.wilo.com/home/
http://www.esbe.eu/gb/en
http://www.bosch-thermotechnik.de/en/tt_com/startpage/startpage.html
http://www.greenonetec.com/en/home/home/
http://www.thermobatterie.net
http://www.consolar.de/index.php?id=7&L=1