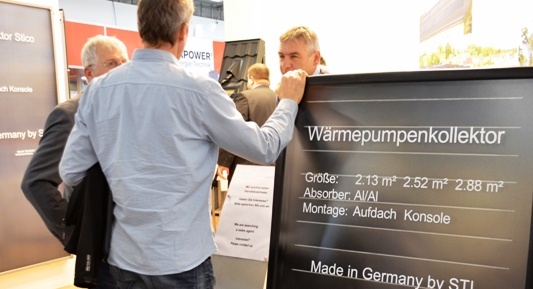 With more than 200,000 visitors from 61 countries and 2,482 exhibitors, this year´s ISH trade fair in Frankfurt, Germany, set a new record. The biannual exhibition showed the latest trends in building and heating technologies, including renewable energy applications. During the one-hour press conference of the German heating industry association BDH, the world “solar” was not even mentioned once. Faced with decreasing interest in solar thermal across central Europe, the portfolio of the few exhibitors specialising in the technology included electric heating in one way or another. The photo shows a collector to regenerate boreholes which are connected to heat pump.
Photo: Eva Augsten
The ISH trade fair reflected the current situation of renewable energies on the German heating market. The solar thermal segment is steadily losing ground and pellet boilers are not often talked about. The shift towards more renewable heating seems to be one towards electric applications. The heat pump segment grew by around 17 % in 2016, whereas the heat market dropped by 2 % overall. Think tank Agora Energiewende has set a target of 6 million heat pumps by 2030 – which seems unlikely considering that conventional boilers still have the largest market share by far. BDH President Manfred Greis warned about pinning one’s hopes on heat pump technology. He said that it seemed like a risky strategy to rely on electric power as the sole source of heat energy while neglecting the good gas infrastructure. But despite the segment’s rapid growth, heat pumps accounted for less than 70,000 of the 700,000 new heating systems installed in 2016.
Sector coupling means “heating with electricity”
The German government wants to push electricity use in the heating sector. The idea is to utilise the rising amount of intermittent surplus electricity from wind and solar parks and find a way to make the heating market “greener”. There are also plans to develop more electric applications in the transport sector. The keyword here is “sector coupling”. The government is working on a new model to tackle the cost burden of feed-in tariffs for renewable power. So far, it has levied a surcharge on the electricity price, which has raised electric heating costs and made it difficult for electric heating solutions to compete with falling gas prices. “We have to find a way to add these costs not only to the electricity side if we want to make sector coupling work and use the electricity transition to transform the energy sector,” said  Thorsten Herdan, Director-General of Energy Policy – Heat and Efficiency at the federal economic ministry. But these ideas for policy changes will not become reality until after the general elections in Germany in September this year.
Few specialised solar exhibitors
There were few solar specialists left among the exhibitors at this year’s fair. Each of them chose different strategies to cope with the decreasing interest in solar thermal in key European countries. Several German solar thermal companies had made electric heating part of their portfolio in some way.
For example, Consolar unveiled a new PVT panel, which both transfers heat directly into the evaporator of an air-water heat pump and generates electricity. Unlike a previous model by Consolar, this one uses water instead of air as the heat transfer medium.
Resol, a manufacturer of solar heating controls, presented their second series for solar heating by electricity. Whereas the prior model FlowSol E had had an integrated heat cartridge to allow for feeding hot water into the tank in layers based on its temperature, the new DeltaTherm PV directly controls a heating element in the storage unit. The advantage of the new system is that electricians can install it on their own without any plumbing skills. The DeltaTherm PV communicates with the inverter of the PV plant and only uses electricity for heating when the power is not otherwise needed in the household. The controller is mainly thought of as a retrofit option for existing PV plants, as new plants usually come with a sophisticated energy management system. Resol is planning to expand the new product line to be able to serve larger projects and the heat pump market.
Solar Technologie International (STI) showed a solar collector designed mainly for regenerating boreholes connected to ground-mounted heat pumps. The return line in these systems is rather cold, which means that the collectors tend to grapple with condensation issues. STI uses an atmospheric collector with condensate drainage and a robust absorber coating.
In addition to electric heating, the selling points of solar thermal seem to be in visual building integration and large projects:
Kioto Solar from Austria showcased its Twin Energiedach, an array of same-sized solar thermal collectors and PV modules, which can be installed by using an identical mounting system for matching appearance, whereas STI is collaborating with Velux to integrate a roof window into a collector field. And Consolar presented a modular tank for large-scale projects.
More information:
ish.messefrankfurt.com/frankfurt/en/besucher/top-themen.html
http://www.bdh-koeln.de/
http://www.consolar.de
http://www.resol.de
http://www.sti-solar.de
http://www.kiotosolar.com/de/waerme/twin-energiedach/