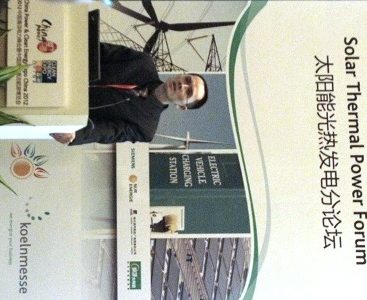 “The solar mandatory laws in provinces and cities in China constitute a very good policy. Only the implementation methods seem rather inappropriate in some cases,” Joseph Huang summarised the results of a study among architects and engineers in the Chinese solar thermal sector in a presentation held at the conference Solar Thermal Power Forum in Beijing in February 2012. The study was carried out on behalf of the Chinese International Metal Solar Industry Alliance (IMSIA). Huang himself is Project Manager Building Energy Management at the Chinese office of the International Copper Association (ICA) and also founded the IMSIA in November 2010.
Photo: Bärbel Epp

In 2011, Huang and his team posed questions to 300 architects and engineers in the cities along the coast, such as Beijing, Haining, Jinan , Xingtai, Sanmenxia, Shenzhen, Nanjing, Wuhan and Qinhuangdao, across which solar water heating systems are mandatory in new buildings. All of these cities require new residential buildings of up to 12 floors to use solar collectors for the hot water of the inhabitants. In some of them – such as Haining, Xingtai, Nanjing and Wuhan – newly built hotels must as well use solar technology to cover their hot water demand. However, the obligations do not stipulate any specific requirements, such as a minimum solar fraction, or a minimum collector area per apartment or head.

Only half of the survey participants knew about the solar obligations in their city or region. When asked why solar water heating system designs often do not fulfil the requirements of the obligation, the interview partners stated the following reasons (the number in brackets shows the share of interview partners agreeing with the respective statement:

According to Huang, another crucial point is the fact that the majority of designers does not know or use a software tool to plan and design solar thermal systems for multi-family buildings. Only 2 % of the interview partners actually used such a tool, all the others had either never heard about it (88 %), or heard about simulation tools, but had never used them (10 %). Consequently, the IMSIA is now about to develop free-of-charge software to plan and design larger solar thermal systems in urban areas.

Building integration with flat plate collectors: The picture shows one of the multifamily buildings from Joseph Huang’s presentation.
Photo: IMSIA

Huang emphasised the importance of strengthening supervision and monitoring of solar thermal systems: “It is essential to design solar thermal systems in a way that they comply with relevant norms and standards and adapt to a building’s specifics, so that the collectors can be nicely integrated into the structure’s façade.”

The Solar Thermal Power Forum ran parallel to the Clean Energy Expo China (CEEC), a B2B fair for clean energy industry in China, which took place in Bejing between 23 and 25 February 2012. CEEC acts as somewhat of an umbrella organisation for sub-fairs in different renewable fields, such as photovoltaics, e-mobility or wind energy. This year was the second year that the organiser, German company Koelnmesse, had a hall dedicated exclusively to solar thermal technology, albeit Concentrating Solar Power fairly dominated the premises. To organise the fair “Solar Thermal China”, Koelnmesse has teamed up these last two years with the National Alliance for Solar Thermal Energy.