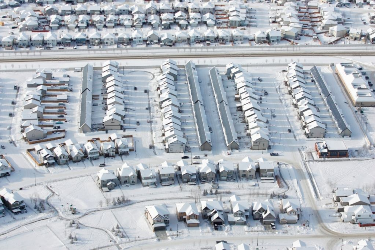 As Bruce Sibbitt, Engineer at Natural Resources Canada (NRCan), announced during his presentation at the Solar World Congress in Kassel, Germany, in September, the solar district heating system at the Drake Landing Solar Community has – in its fourth year in operation – almost reached the planned solar fraction of 90 %. In addition to borehole heat storage of 34,000 m3, the system is equipped with two short-term storage tanks, which have a capacity of 120 m3 of water each.
Photo: Natural Resources Canada

52 single-family houses benefit on their two storeys from the generated district heating energy. As for domestic hot water, each house has its own solar water heater, which generates around 50 % of the water heating energy, while a gas-fired boiler supplies the rest. The solar district heating system is a project of the governmental organisation Natural Resources Canada (NRCan). Utility ATCO Gas is said to acquire ownership and take over operation in the near future.

The conditions are very favourable for installing a solar water heater in the settlement close to Calgary: First, the location enjoys excellent solar resources. Annual irradiation is at 1,785 kWh/m2*a, which is comparable to central Spain or southern Italy. Second, the Canadians use air heating systems, which were adapted even further in this case to allow the entire system to operate at relatively low, solar-friendly temperatures. The temperature of the water running through the pipes of the district heating system depends on the temperature of the outside air, but is usually cooler than in European water heating systems: even at freezing –40 °C outside, the water in the pipes is no warmer than 55 °C. An air handling unit transfers the heat from district heating to the household system.

A lot of heating energy is required around Calgary. Even in summer, a bit of heat remains necessary: Calgary has 5,199 heating degree days per year (= (18 °C – outside air temperature) * number of days). “Which means the heating season, in fact, never stops,” Bruce Sibbitt says. In summer, the heat pumps are halted around 12 hours per day to allow maintenance works.

798 flat plate collectors with a total gross collector area of 2,293 m2 generate the heat. The collectors have been mounted on the garage roofs in four rows. The solar heated water is stored in two short-term storage tanks, which are located in the so-called Energy Centre. Here, water from the cooler storage tank runs through a heat exchanger, absorbs the heat from the solar circuit and is fed into the upper part of the warmer storage tank. Both storage tanks lie horizontally, but are separated by baffles in the middle to improve stratification. In 2009, the tanks were retrofitted with diffuser pipes, which are inserted at the very top of the tanks, to ensure that – if needed – water can be fed into and taken from the warmest area of the tank. When the short-term storage is heated, the heat is fed to the underground borehole storage.

The borehole storage consists of 144 single U-tube boreholes heating up about 34,000 m3 of earth. The borehole area has a diameter of 35 m and is 35 m deep. On the surface, it is insulated with 200 mm of foam. The core of the borehole storage reaches temperatures of more than 65 °C in autumn and goes down to 40 °C in spring. Because the storage does not have precisely set borders or insulation within the ground, heat losses were pretty high over the first years, until the earth around the storage had reached a suitable temperature. Measured storage efficiency then rose from 6 % in the first year to over 40 % in the fourth year, which has been almost in line with the simulations carried out beforehand. The solar fraction of the heating energy rose from 55 % in the first year to 86 % in the fourth year. This means that the system has almost reached the 90% solar fraction it was designed to achieve. “It is likely we will reach 90 % in the fifth year,” Sibbitt says. Mean efficiency of the solar collectors was expected to drop with the rising solar fraction, but has so far remained fairly stable, at 33 %. In the fourth year in operation, 683 MWh of solar heat were delivered for space heating. This corresponds to a yield of 278 kWh/m2 of gross collector area.

Assuming a system life of 40 years and a collector life span of 20, the solar heat costs 0.17 Canadian Dollars (CAD) per kWh (0.12 EUR/kWh). The calculation is based on initial system costs of CAN 3,385,000 (EUR 2,473,000), including the Energy Centre and its short-term tanks (CAN 600,000), the borehole storage (CAN 620,000), the heating and solar collection loops (CAN 1,025,000), the solar collectors (CAN 710,000), and collector installation (CAN 430,000). Comparing the relatively high cost per kWh to the cheap solar heat from the ground-mounted systems in Denmark (around 0.04 EUR/kWh) has proven quite a challenge because the latter usually exclude initial system costs. Most of the overhead costs of the Drake Landing project were covered by funds from several federal programmes and the Province of Alberta. The homes were sold on the open market.

“The project was designed and built with the full knowledge that the solar system was smaller than the economic optimum,” Sibbit says. With the data collected at Drake Landing, NRCan research institution CanmetENERGY plans to calibrate its simulation model for solar systems. The next project at which the model may be in use is a district heating system for 1,000 living units in the Calgary area, which is going to be built and run by the same organisations that set the Drake Landing project in motion.