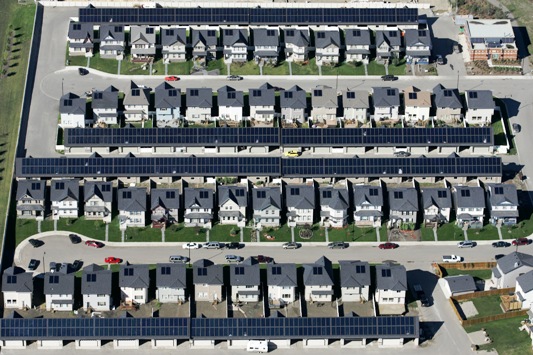 The Canadian Drake Landing Solar Community has hit a new performance milestone, recording its first year of solar-only space heating during heating season 2015-2016. The community’s SDH plant, which has been in operation since 2007, was initially designed to achieve a solar fraction of 92 to 93 % for space heat in an average year. System improvements have increased that share and have made last winter the first time that solar energy was able to meet 100 % of the space heating requirements of the 52 energy-efficient residential buildings. The families heat their hot water with their own solar water heaters and gas-fired boilers. The initiator of the project was Natural Resources Canada (NRCan), which has since remained the central technical support.
Photo: CanmetEnergy, Natural Resources Canada
“We lowered the district loop temperature to the homes and enhanced the thermal stratification in the tank through reduced flow rates,” Doug McClenahan, Solar Thermal R&D Programme Manager Renewable Heat and Power at NRCan said about the improvements which increased performance over the last five years to an average solar fraction of 96 %. Also important was to include the weather forecast in the operational mode of the system. “In anticipation of a cold front, we fill the short-term storage tank with heat from the borehole seasonal storage at low flow rates over several days, in order to have a heat buffer available with the highest temperature possible while using the least amount of electricity,” McClenahan explained.
Solar district heating needs 8 to 10 times less electricity than heat pumps
Initial simulations based on weather data spanning over 50 years showed a 100 % solar fraction year to be a rare event which would only occur in the 34th year of operation. “We are now expecting to reach the 100 % milestone relatively regularly,” said McClenahan.
NRCan also noted in its report about the Drake Landing community that the high performance of solar heating had been achieved with very little electricity consumed, resulting in a coefficient of performance above 30. This means that for every kWh of electricity used by the pumps, the system delivers more than 30 kWh of heat, which is eight to ten times the efficiency of a heat pump. Hence, the technology not only reduces CO2 emissions, but also offers significant opportunities to minimise the plant’s impact on the electricity grid.
Website of the project and web pages of the institutions mentioned in this article:
http://www.dlsc.ca.
http://www.nrcan.gc.ca/