While Miraah in Oman (see photo) has only recently begun its solar steam production, US-based Glasspoint has already announced plans to construct another solar plant for enhanced oil recovery. Together with Aera Energy, the company intends to build an 850 MW solar steam-producing plant at the Belridge oilfields just outside Bakersfield, north of Los Angeles, California. In combination with a 26.5 MW PV system, solar energy is expected to save 4.87 billion ft³ of natural gas annually. A Glasspoint press release sent out on 30 November said that construction should start in the first half of 2019 and steam was planned to be produced by the system at the beginning of 2020.
Photo: Glasspoint
Aera Energy is jointly owned by Shell and ExxonMobil and accounts for nearly 25 % of the state’s oil production. For more than 100 years, the Belridge oilfields, located about 45 miles northwest of Bakersfield, have been used for extracting mostly heavy oil, which is thick and more difficult to obtain than light oil found elsewhere. “To enable the production, the water mixed with the oil in the ground, and produced along with it, is separated and heated up in the parabolic trough collector field. The steam is then reinjected into the ground to heat the heavy oil, so it’s easier to pump to the surface,” the project fact sheet reads. 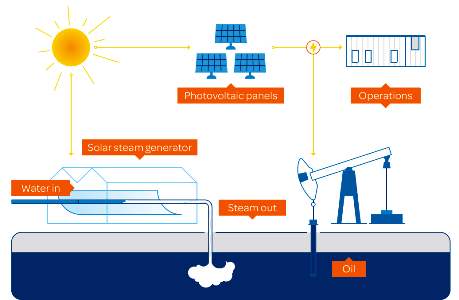 Solar supply for Enhanced Oil Recovery plant
Scheme: Glasspoint
“Our enclosed trough collectors are producing the exact same steam as currently made by Aera’s gas-fired boilers, and they use oilfield-produced water,” confirmed John O’Donnell, Vice President of Business Development. The steam specification for EOR is different to the one for electricity generation, which means the steam is not made to be used in turbines to produce electricity. It is the reason why the two partners have decided to build a PV plant as well, so it can supply the Belridge oil facility with the necessary power.
The fact sheet lists Glasspoint as an “energy producer”, which sounds as if the company intends to sign a solar energy supply contract with Aera Energy. When asked about it, Glasspoint’s communications department replied: “The structure of the deal is confidential, but the two companies are collaborating closely to design and build the world’s first oilfield-integrated solar energy project that will deliver both steam and electricity to power operations.”
What is clear, however, is that Glasspoint will use the glasshouse construction which it developed in Oman, where the parabolic mirrors are protected against wind and dust by greenhouses, structures similar to those used in the agricultural industry. These greenhouses allow for automated washing at night-time, with full recapture of the washing fluid.

Onsite production within the greenhouses has cut the number of containers in half in Oman
Photo: Glasspoint
Glasspoint has cost-optimised all parts of the design and the manufacturing of the solar thermal field. Key figures have been included in a submission to SolarPaces 2017. The paper details how Glasspoint and its customer Petroleum Development Oman have made improvements leading to 55 % cost savings at Miraah compared to the pilot project it built in 2012 (see link below).
The paper also highlights that at Miraah, construction has been sped up and labour per unit reduced to approximately 10 USD/m²: “Installation of mirrors and receivers initially took over 0.6 labour hours per m² of greenhouse. As the number of cumulative rows installed grew, proficiency increased and specialised tooling reduced this to less than 0.2 hours.”
Organisations mentioned in this article:
https://www.glasspoint.com/
www.aeraenergy.com
Technical paper: https://www.businesswire.com/news/home/20171004005453/en/GlassPoint-Pres...
News
Process Heat
USA
California
Oman
Miraah
enhanced oil recovery
solar steam generation
EOR
SolarPaces 2017
GlassPoint
Aera Energy