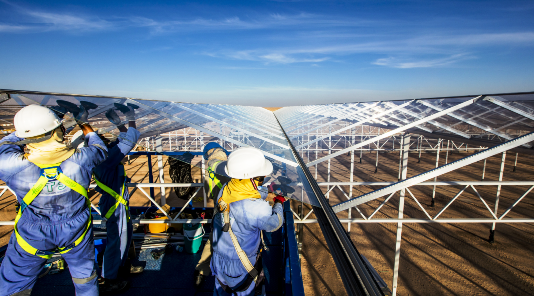 Replacing gas with sunshine for enhanced oil recovery (EOR) is a cost-effective solution. This is the key message of US-based company Glasspoint, which has mobilised the biggest investment ever in a solar steam-producing unit in Oman. State-owned Petroleum Development Oman is building a concentrating solar thermal collector field called Miraah next to the Amal West oilfield. Once complete, it will generate more than a gigawatt of solar thermal power to drive EOR operations – saving Oman about 5.6 trillion BTUs of natural gas each year.
Photo: Glasspoint
“Miraah construction is currently ahead of schedule and under budget,” confirmed Katie Struble, Director of Marketing at Glasspoint. “We are on track to produce steam from the first greenhouse block, of 36 total, before the end of this year. Our team recently achieved over 500,000 safe working hours on site.”
EOR techniques provide steam which is used for heating the heavy crude oil in the ground to improve flow properties and make it easier to pump the oil to the surface. Ageing oil fields and the need to extract more crude have led to a significant increase in demand for EOR technologies. “The global EOR market was valued at USD 60 billion in 2014 and is expected to experience a compound annual growth rate of about 25 % to reach USD 225 billion in 2020,” it said in a news article in The National Business Review from 20 March, based on figures by US consultancy Zion Research.
Historically, thermal EOR – or its most commonly used method, steam injection – has been based on gas-fired boilers. Glasspoint’s innovative technology puts solar parabolic trough collectors inside agricultural greenhouses. The company’s founder, Rod MacGregor, said that “this construction reduces the initial upfront investment to about half and protects the solar array, so that it does not have to been cleaned that often. As a result, the operation costs of the system are also much lower.”
MacGregor added in the same YouTube interview that the oil industry was the main thermal energy user around the globe: “The oil and gas industry consumes about 10 % of its own production – that’s equivalent to 9 million barrels of oil per day – this is the equivalent oil consumption of Western Europe annually.”
The National Business news piece had MacGregor confirming that the next projects could potentially be developed in Kuwait. Glasspoint has a subsidiary in the Arab country, which has already started to see strong interest in solar EOR technologies. MacGregor added: “Using solar at the oilfield will greatly help Kuwait to achieve its plan of generating 15 % of the country’s energy needs through renewable resources by 2030.”
Fourth Industrial Revolution
Glasspoint has more than tripled its staff over the past years and employs 325 people at seven different locations. In 2016, it was recognised as a Technology Pioneer by the World Economic Forum and took part in the forum’s annual meeting in Switzerland in January this year.
“We welcome Glasspoint to this extraordinary group of pioneers,” said Fulvia Montresor, Head of Technology Pioneers at the World Economic Forum, according to http://helioscsp.com. “They are among a list of companies that are helping to shape the Fourth Industrial Revolution, a technological revolution that will fundamentally alter the way we live, work and relate to one another.”
Websites of organisations mentioned in this article:
World Economic Forum: https://www.weforum.org
Glasspoint; http://www.Glasspoint.com/
Petroleum Development Oman: http://www.pdo.co.om/