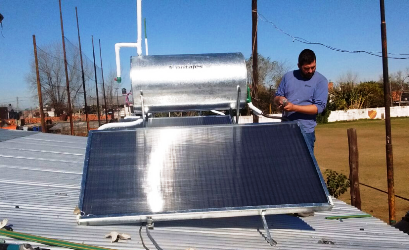 The first time that the new Cámara Argentina de Fabricantes de Equipos de Energía Solar Térmica (CAFEEST) (Argentine Chamber of Solar Thermal Equipment Manufacturers) was presented to a wider audience was on 4 September in Buenos Aires. The chamber’s assembly meeting was hosted by the Ministry of Industry. Currently, CAFEEST has 20 members, mostly manufacturers, and seven more may join soon. Dardo Allaragüe, President of CAFEEST and head of Montajes Rosario, a solar system supplier, said that the objective was to support a growing local industry, help create jobs and participate in implementing standards and certification schemes. There’s also a new law being discussed in parliament to further solar thermal installations, rules and incentives across the country.
Photo: Montajes Rosario
Argentina’s solar thermal market seems to have been in a “sweet spot” lately. After strong growth rates in recent years  and the government declaring 2017 a Renewable Energy Year, local manufacturers decided to join forces to promote the domestic market.
Allaragüe explained the aims of the newly founded chamber, which has been promised support by the Ministry of Industry, as follows:
He said that the current production capacity of the 27 manufacturers in Argentina is 16,800 solar thermal systems per year and pointed to the around 22,000 solar thermal systems from Asia that had been imported in 2016. He confirmed that “our own industry is strong enough to replace these imports.” Alexis Atem, Co-founder of CAFEEST and President of Energe, a manufacturing and installation business, said that around 15,000 new solar water heaters or 30,000 m² had been installed last year.
Law promising nationwide incentives not yet approved
Since 2016, Argentina’s solar thermal industry has been expecting the approval of a new law to create solar thermal incentives at national level. The draft bill, promoted by Senator Pamela Verasay from the ruling Cambiemos coalition, aims to support the growth of domestic manufacturing capacity, establish solar thermal as an alternative, particularly in areas where there is no residential gas supply, and set new, commonly accepted standards and regulations on solar heater quality, efficiency and safety. The second objective is to implement an obligation which would initially target social housing projects and public buildings and more building types later on.
The bill has been awaiting approval since 2016. Allaragüe said that it had so far passed several committees and would come into effect over the next 90 days. Atem, however, believes that after the bill is approved, the government will need some time to develop and implement the relevant regulations, which means that actual enforcement may take a bit longer. “It’s a law with a lot of public and private support, meaning we really trust in its timely approval. We expect it to come into force soon and create favourable conditions for our market,” he said.
Websites of companies mentioned in this article:
http://www.energe.com.ar
http://www.montajesrosario.com.ar