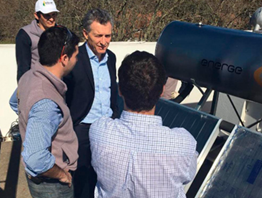 After having announced plans to sharply increase energy prices across the country, the Argentine government is said to approve new legislation for promoting solar thermal technology. A new bill, which is expected to be passed by the end of 2016, is thought to create a number of financial incentives, soft loans and a binding obligation for solar water heaters in public buildings. However, the domestic market has already been experiencing remarkable growth: Solar water heaters have gained a significant boost in popularity since this July, when President Mauricio Marci ordered a 260-litre system equipped with a flat plate collector from Energe, one of Argentina’s major solar thermal suppliers. The photo posted on Energe’s Facebook page shows the president (middle) and a team from the company at the new solar thermal installation.
Source: Energe
“We installed the solar thermal system directly at the president’s home in the city of Olivos, and it is now fully operational. This system has been a real boost to our company,” Sebastián Pérez explained. The managing partner said that Energe had experienced a 50-fold increase in the number of consultations on solar thermal over the past year. “Sales have also doubled: We‘ve reached 600 systems per month this year. During the last one, we manufactured and sold around 3,000 systems overall,” he explained. “Customers are still waiting to see where gas prices end up, but we expect sales to increase at least three-fold in 2017,” Pérez said.
Energe’s story of successful growth is not the only one unfolding in Argentina. Francisco Sfreddo from Sungreen, another solar installer from Buenos Aires, told website Energía Estratégica on 10 August 2016: “We’ve seen a 50 % increase in sales and have four times as many consultations year-on-year.” According to the online article, the February announcement on energy price increases and the president’s order of a system from one of SunGreen’s competitors had been the main drivers for solar over the past year.
At present, it is still impossible to gauge the size and growth of the domestic market, as there are no official sources which could provide figures or statistics. Pérez put yearly installation figures at around 10,000 to 15,000 systems for 2015.
Phasing out energy subsidies
Energy prices are starting to become a topic of popular outrage in Argentina. At the beginning of this year, the government of Mauricio Macri announced a set of measures intended to end subsidised energy tariffs by 2019. The proposal by the government would increase electricity and gas prices by 500 % in some cases. The announcement has prompted a number of public protests and demonstrations in a country that had already been hit hard by soaring inflation, which is running at around 40 % annually. Although some of the measures were halted by the Supreme Court on 19 August, the government’s intent is clear. Gonzalo Bravo, Researcher and Associate Professor at the Fundación Bariloche, put it this way: “There might be some temporary legal drawbacks regarding the government’s plans, but the message comes through clearly: Tariffs are going to go up – no matter what.”
Solar thermal bill
Now, Macri’s government seems to be focusing on the promotion of locally produced renewable energy sources. On 6 September, it invited tenders for renewable electricity projects. Despite a cap of 1,000 MW for the programme’s first round, applicants submitted a total of 123 projects with some 6,400 MW, including ones with wind, PV, biogas and hydropower technology.
At the same time, a new solar thermal energy bill has been under discussion in the senate, the upper house of the Argentine National Congress. A draft of the bill, entitled Use of Solar Thermal Energy of Low and Medium Temperature, has already been made available (see the attached document). This draft shows tax incentives for micro, small and medium size enterprises involved in the production, operation and maintenance of solar thermal systems for either hot water preparation, space heating, cooking or drying. It states that investors may apply for an early VAT reimbursement and / or alternatively for an accelerated depreciation of the investment. The document’s Article 11 additionally offers low-interest loans to investors in solar thermal systems, with interest rates still having to be defined.
The bill is complemented by some mandatory rules for public buildings: At the end of the third year after passing of the bill, 60 % of the public social housing developments, health centres and schools are to include solar thermal installations (Article 12). At the end of the sixth year, all of the aforementioned buildings must be equipped with solar thermal systems.
The bill, however, is still awaiting approval and additional regulations will need to be created even after it comes into force. Said Bravo: “The bill might be approved by the end of this year, but the regulations will take more time, at least a full year to have all of them put into effect – unless the political will is there to speed up the process.”
Websites of companies mentioned in this article:
http://www.energe.com.ar
http://www.sungreen.com.ar/
https://solarthermalworld.org/wp-content/uploads/2016/10/energy_law_argentina_2016.pdf