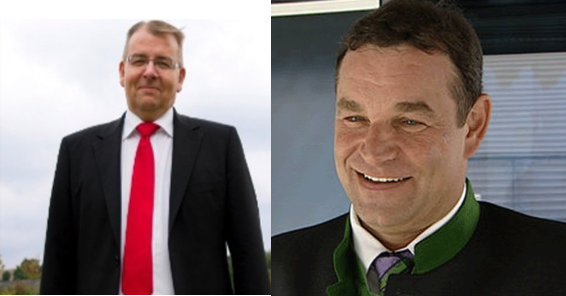 This week, a historic acquisition took place in the solar heating and cooling industry. Greenonetec, the largest collector manufacturer in Europe, purchased key parts of the business of Danish-based Arcon-Sunmark, the European leader in developing solar district heating projects. The acquisition followed months-long negotiations between Greenonetec CEO Robert Kanduth (right) and Torben Sørensen, Group Executive Officer at VKR Holding, the corporate group that owns Arcon-Sunmark. VKR Holding decided to terminate most of the solar thermal business within the group because of huge price drops faced by suppliers of large solar fields and fluctuations in the contracting market, which resulted in considerable losses for Arcon-Sunmark in recent years.
Photos: VKR Holding / Greenonetec

The week started with the publication of a press release stating that parts of Arcon-Sunmark will be sold off because of a large financial deficit in recent years. “The financial development with heavy losses is intolerable,” Thomas Karst, current CEO of Arcon-Sunmark, is quoted as saying in the press release from 30 March. “We are sorry about the situation. However, we respect the decision of the owners.”
The press release also said that negotiations with those interested in purchasing parts of the business were in progress. In addition, Karst promised to do the utmost to help the company’s customers and its 50 employees, who were given notice this week. Arcon-Sunmark will retain a service team of about 20 technicians under the roof of VKR Holdings to fulfil all warranty and service obligations.
Consolidation needed
Three days later, on 2 April, Arcon-Sunmark sent out a second press release stating that Greenonetec acquired key assets of Arcon-Sunmark and that the Chinese Solareast Group (which owns the Sunrain and Micoe brands) bought the shares in Chinese-Danish joint venture Solareast Arcon-Sunmark Large-Scale Solar Systems Integration, which has put up two solar district heating plants in Tibet over the last years.
“We have taken an important step towards consolidating the solar thermal industry by bringing Arcon Sunmark’s extensive expertise in project development and large-scale collector production to our highly streamlined solar manufacturing business,” Kanduth explained. He plans to integrate the fully automated production line for large-scale collectors into the company’s factory in Austria and retain the majority of the project development and sales team of Arcon-Sunmark. He also confirmed that he wants to focus on sales and project development in Europe and North America and has no plans for the Asian market. The latter is why Arcon-Sunmark’s assets in Asia, including the factory in Vietnam, were split off and sold to the Solareast Group.
Kanduth described the negotiations with VKR Holding as highly respectful. Both teams have known each other for many years and the two company groups share a common history. Greenonetec was 50 % owned by VKR Holding between 2005 and November 2014, when Kanduth bought back the 50 % stake from the Danish holding company. Kanduth added that the Chinese Haier Group, which bought 51 % of Greenonetec in May 2017, was not directly involved in the negotiations with VKR Holding, since the deal fell under his authority as managing director of Greenonetec.
Hight fluctuations in contracting market
Arcon-Sunmark believes that, among other things, an unclear regulatory framework was responsible for the high fluctuations in turnover. The company saw sales shoot through the roof, for example, in 2016, when it generated DKK 457 million. But it also had to cope with severe drops in demand, such as a year later, in 2017, when turnover was only DKK 98 million because of a delay in extending the energy savings agreement between Danish utilities and the Danish energy ministry at the end of 2016. The same happened in 2019, when all solar thermal systems were commissioned in the first six months, as the energy savings scheme ended in summer, causing business to dry up in the second half of the year.
Greenonetec is in a different situation with respect to the contracting market, as the company’s core business is the OEM manufacture of small collectors and thermosiphon units. Its project development division has so far contributed little to the company’s total turnover, so that the ups and downs in the contracting market had less of an impact on revenues. “We see a bright future for our company in the contracting market, now that the acquisition has completely changed the competitive landscape,” emphasized Ingo Lankmayr, Sales Manager at Greenonetec. “The development of large solar fields will become a key pillar of our business strategy.”
Organisations mentioned in this article:
https://www.greenonetec.com/
http://arcon-sunmark.com/
https://vkr-holding.com/
http://en.sunrain.com/
http://www.arcon-sunmark.cn