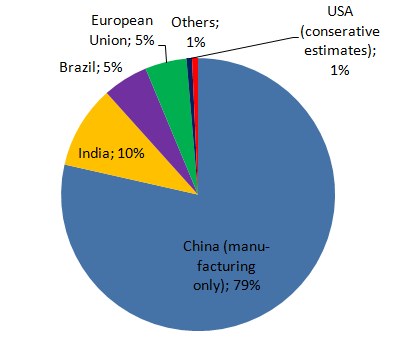 Data on the number of solar water heating and cooling jobs differs greatly from publication to publication. According to the annual study Renewable Energy and Jobs – Annual Review 2015 by the International Renewable Energy Agency (IRENA), there were approximately 764,000 people employed in solar heating and cooling globally in 2014, 16 % lower than in 2013 because of the market decline in China. The pie chart shows the distribution among the main markets. The Solar Heat Worldwide 2013 report, published in June 2015 by Austrian research institute AEE INTEC, assumes worldwide employment figures in solar thermal to add up to no more than 460,000 full-time jobs in 2014 (find both studies attached).
Chart: IRENA
The authors of the IRENA study qualify their numbers as “rough estimates”. Michael Renner, co-author of the IRENA study admits: “Painting a complete and reliable picture of employment data on heating and cooling remains difficult.” As reports have been rare and contain limited information on methodologies and the segmentation of the value chain is far from clear. This is especially true for China, which is home to more than 80 % of the annually installed capacity worldwide, Renner says. A 2009 study published by the Chinese government and the International Labour Organization estimated that 800,000 people were employed in the SHC sector. “Last year, we received a much lower estimate from the Energy Research Institute in Beijing, with 350,000 jobs but again no explanation of how this number came about,” Renner explains.
2.2 million employed in sales, installation and aftersales in China
The 2015 edition of the IRENA job report now refers to consultations with experts from the China National Renewable Energy Centre. The institute updated its 2013 figure to 760,000 jobs in the manufacturing sector and estimates 600,000 jobs in 2014, which represents a 20 % decline because of a strong downward trend in the Chinese market in 2014. Still, one should consider that according to IRENA, “as many as 2.2 million people may be employed in sales, installation and aftersales services of solar water heaters” in China. Whilst IRENA employment data usually consists of direct and indirect employment, Chinese data was limited to direct employment (manufacturing) in order to avoid double counting, because many of the people employed down the value chain were only part-time employees in the solar thermal industry. Most of their time, they worked in general plumbing or even PV installation. According to the authors of the study, a full-time equivalent was impossible to give, which is why jobs further down the value chain had been left out completely. In total, one might conclude that the present number of 600,000 Chinese solar thermal jobs can be seen as a rather conservative estimate.
IEA methodology: One job per 132 m² of newly installed collector area
Renner confirms that he had to rely on estimates by national associations or institutions, as IRENA does not estimate ratios, for example, as AEE INTEC does for their Solar Heat Worldwide report. According to one of authors of the AEE INTEC study, Franz Mauthner, AEE INTEC’s estimate is based on an Austrian study published in 2003 and a study from the European Solar Thermal Industry Federation, ESTIF, from 2006 – both focusing on Central Europe. Starting with a ratio of 1 job per 100 m² installed in the base year (2006), the authors take into account productivity gains of 4 % per year, so that the 2014 ratio for Central Europe would be 1 job per 132 m² installed. Projections for markets outside Europe and China require further investigation, Mauthner says. The researcher recommends to determine benchmark figures, such as full-time jobs for installed collector area, separately for pumped and thermosiphon systems.
The authors of both studies believe that it could be interesting to really work out a standard method for calculating job creation in the solar thermal industry. “We will reserve resources for updating the method and check data with other institutes like IRENA for next year’s report,” Mauthner announced.
More information:
http://www.irena.org
http://www.aee-intec.at
This news was written by Vanessa Kriele, a German freelance journalist specialised in renewable energies and world economics.
https://solarthermalworld.org/wp-content/uploads/2015/06/irena_re_jobs_annual_review_2015.pdf
https://solarthermalworld.org/wp-content/uploads/2015/06/solar_heat_worldwide_2013_edition_2015.pdf