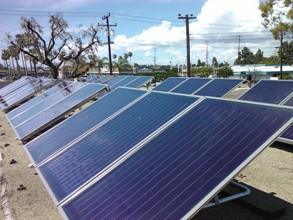 Demand for subsidised solar water heater is very different in Europe and the USA. A comparison between California and the Czech Republic shows that the growth potential is much higher in European countries. The number of applications submitted to the national subsidy programme has been 100 times as much in the Eastern European country as in the US state. The photo shows a commercial solar water heater on a multi-family apartment community in Huntington Beach, California, installed by California Solar Thermal, Inc. The 24-panel-installation was subsidised by both California Solar Initiative (CSI) – Thermal Program as well as the Federal Treasury Grant (30%) and reached a payback time of two years.
Photo: California Solar Thermal

The Czech residential subsidy programme Zelena Usporam (Green Savings) was the great market driver of 2010. Within only 10 months (between January and mid-October 2010), an incredible number of 47,000 applications had been submitted, of which 27,000 were approved. The subsidy covered 50 % of the investment costs of a solar thermal system. In California, the picture is very different: Within the first 15 months of the CSI – Thermal Program, only 255 projects received approval. Together with the federal tax credits of 30 %, the CSI subsidy adds up to around 50 % of the investment costs – the same as in the Czech Republic.

“The application rate is increasing slower than anticipated,“ the representative of a Californian solar system supplier remarks. Low energy prices and too much heavy paperwork are seen as the major barriers to programme development. During the June conference call of the USH2O network, a contractor was quoted as offering a client a system for USD 10,000 including an application at CSI – Thermal programme, or at a price of USD 8,000 without a CSI application. The cap for the residential system subsidy for replacing a gas boiler – which is the most common way of heating water in California – is at USD 1,875. And thirdly, the marketing campaign announced at the beginning of the programme has not yet started. The programme administrators are now in the process of choosing an agency to work with, and the campaign is said to start in early autumn this year.

No clear upward trend: The figure shows the monthly number of applications within the CSI – Thermal Program in California since its start in May 2010. The commercial part of the programme began in October 2010. As foreseen by the programme´s administrators, the commercial systems take the lead. In recent months, every second application has featured a commercial or multi-family project. The figures have been taken from the publicly accessible database at http://docs.cpuc.ca.gov/PUBLISHED/FINAL_DECISION/112748.htm Source: CPUC

Among the 255 projects in California approved until the end of June 2011 are 197 single family systems and 58 multi-family residential and commercial systems. It is a special feature of the CSI – Thermal Program that commercial systems receive an incentive capped at USD 250,000 for systems replacing gas boilers and USD 500,000 for systems replacing electric ones. The average incentive amount for the 45 multi-family residential and commercial projects was USD 19,190, according to a presentation held at the American Solar Energy Society (ASES) conference in May 2011 by Skip Fralick, California Center for Sustainable Energy (CCSE).

Fralick furthermore announced that the programme initiator, the California Public Utilities Commission (CPUC), is going to extend the number of eligible solar thermal technologies to include, for example, solar cooling systems and space heating, in 2012. A precise date has not been given yet. It is under discussion that with the new technologies, a real performance-based incentive could be implemented as well. Until now, all residential and small commercial systems up to 250 kWth (=357 m2) are granted in form of one upfront payment. Larger commercial systems with more than 250 kWth receive 70 % upfront based on a TRNSYS simulation. The other third of the subsidy will be paid after the system has been its first year in operation, depending on the metered solar yield. Produced kilowatt hours are paid up to an amount of 110 % of the TRNSYS-simulated output. So far, no such case has appeared. The largest solar thermal system approved so far has 289 m2.