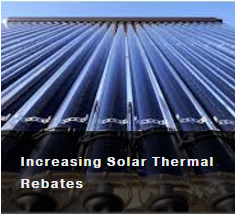 Against all odds, the solar heating tax credits in the USA were extended again by 5 years. On 18 December 2015, the Consolidated Appropriations Act was signed, including an extension of the so-called federal Investment Tax Credits up to 2021. Originally, the tax incentives were expected to end on 31 December 2016 after an eleven-year period since 2005, with one previous extension in 2008. They allow both residential and commercial investors of solar PV and solar thermal systems to deduct 30 % of the investment costs at the next tax declaration.
Photo: Calseia.org
According to the new regulations, the tax credits for photovoltaics, solar water heating, space heating, solar cooling and solar process heat will decrease over time. Until 31 December 2019, they will remain at 30 % and will then be reduced to 26 % for projects installed in 2020 and to 22 % for projects installed in 2021. Beginning in 2022, the rebate will be set to only 10 % of the investment costs for commercial/business systems and to 0 % for residential systems.
“This historic vote brings the solar industry to the forefront of the conversation about American energy,” Rhone Resch, President and CEO of the Solar Energy Industries Association (SEIA), was quoted as saying in a press release from 18 December. SEIA stated that the five-year extension would add 220,00 new jobs by 2020 and lead to more than USD 133 billion in new private sector investment over the coming years.
As in the past, solar energy in the USA primarily means photovoltaics. “Indeed, our job forecast is based on the expansion of solar electricity demand. Because we don’t have any data (historical or projected) on SHC demand, it’s not really possible at this point to do a job forecast for that technology,” confirms Alex Hobson, Press Officer and Communications Manager at SEIA.
According to the latest estimates from US-based consultancy GTM Research, 7.4 GW of new PV installations went online in 2015, up by 19 % over 2014. This is far from what the US solar thermal sector can claim. GTM Research, however, has not been reporting on the solar heating and cooling market since 2011 because of the small number of companies in the business that will respond to questionnaires. Hence, market volume estimates are again the responsibility of Les Nelson, Vice President of the Solar Heating & Cooling Programs at the International Association of Plumbing and Mechanical Officials. A long-time expert on the solar heating and cooling sector, Nelson also regularly reports US installation figures to the authors of the Solar Heat Worldwide study.
Market statistics of newly installed collector area based on market research by Les Nelson. Figures 2001 to 2013 taken from Solar Heat Worldwide. 2014 directly sourced from Les Nelson. 2015 market statistics have not been available yet.
Nelson reported that 2014 was an extremely weak year for solar heating in the US: Newly installed collector area was down to only 183,365 m², a decrease of 18.5 % compared to the previous year. Nelson’s analysis is based on a survey of US-based flat plate collector manufacturers as well as vacuum tube collector assemblers. He averaged their market volume decline in 2014, but did not really remove the export share in the produced volume. His rough estimate also does not factor in any import figures of flat plate collectors.
The reasons for the weakened state of the solar thermal market are evident: low natural gas prices and installer business models which focus on photovoltaics because of the demand created by the strong marketing efforts of solar electricity system providers. The following indicators and statements corroborate the negative trend in the solar thermal market in 2014 and 2015 across the country (only exception: Hawaii):
Institutions and companies mentioned in the article:
http://www.seia.org
http://www.seia.org/us-solar-heating-cooling-shc-alliance
http://www.iapmort.org/Pages/SolarCertification.aspx
http://randrsolar.com/
http://www.solpal.us