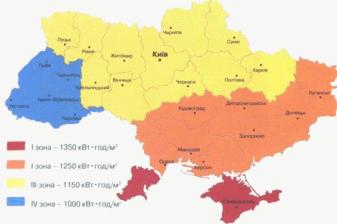 A huge and sunny country: The southern parts of the Ukraine enjoy an annual radiation of 1,350 kWh/m2, the northern parts around 1,150 kWh/m2. Solarthermalworld.org spoke with four national suppliers and manufacturers of solar thermal systems about the general market development.
Source: http://kostrovoe.com.ua/stat/solar_uk.php

Despite the economic crisis, 2008 was a very successful solar year in the Ukraine: Approximately 10,000 m2 of collector area were installed in the country, according to industry estimates. Far more than half of it left local factory halls, belonging to the three Ukraine collector manufacturers.

All three are based in the sunniest part of the Ukraine on the Crimean peninsula. And every interviewee from these three companies agreed that 2008 was a very successful year with the market growing substantially. Wladimir Sogomonyan, director of the manufacturing company Krymskaja Teplovaja Kompanija (translated as The Crimean Thermal Company), counted 2007 and 2008, as well as 2002 and 2003 among the successful years, whereas between 2004 and 2006 production stagnated. The director thinks the impact of the financial crisis has been very severe in 2009.  Nevertheless, Sogomonyan is expecting the market to recover in 2010.

Sint Solar, another producer of solar collectors, finds itself in a similar situation: “Although we reached a growth of 25 % this year, we would have expected a much higher figure without the economic crisis,“ says Olina Sitsch, the head of department of energy-saving technologies, of Sint Solar.

What is the reason behind the increased interest of the Ukrainians in solar thermal technology? As in most emerging solar markets, one major driver is continuously growing energy prices. They force more and more people to look for alternative sources of energy to heat or cool their households. “As we don´t receive any state subsidies at the moment, our customers are mainly middle class people. Nevertheless, solar collectors have become more affordable to the majority of the people,“ says Alexander Kowpak, project ingenieur of Atmosfera, a distributor of solar thermal systems based in Kiev.

According to Atmosfera, there are three different groups of costumers:
• middle-class citizens searching for an alternative source of energy because of growing energy prices.
• small and medium size companies, such as restaurants, cafés and hotels. Their energy bills are roughly 3 times higher than those of normal citizens. Therefore, installations pay off faster.
• owners of buildings that include a boiler room – such as hospitals and very old buildings. Solar energy has a big advantage for these customers due to the fact that a heating boiler’s efficiency during the summer months lies only at about 10 % of its usual output.