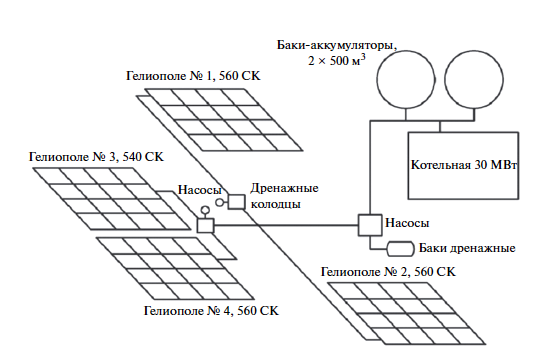 Compared to the size of the country, Russia’s solar thermal market was still small last year. Dr Semen Frid, who works at the Russian Academy of Sciences, or, more specifically, at its Joint Institute for High Temperatures (JIHT), estimates that 460 m² of collector area was added in 2018. And Professor Vitaly Butuzov, who teaches at the Kuban State Agrarian University, put the figure even lower, at only about 100 m², most of it installed in the Krasnodar region and on Crimea. Both experts used interviews with Russian collector manufacturers and importers to make an educated guess. According to Butuzov, the three businesses importing the most solar collectors to Russia are Bosch Thermotechnik with its brand Buderus (Germany), Sunrain (China) and Atmosfera (Ukraine).
Source: Kuban State Agrarian University
The experts’ estimate for 2017 was 459 m², 86 % of which was flat plate collector area. More market data is available in a news article titled Solar Heat Supply: World market statistics and features of the Russian experience, published by Butuzov and his team last year (see the attached document).
The 11-page news article also shows that a total of 23,669 m² of collector area was installed by the end of 2017 (page 6). The share of flat plate collectors was estimated at about 85.4 %, while that of vacuum tubes was at about 13.4 %. Unglazed collectors only made up 0.6 %, and air collectors 0.3 % of the total.
According to the authors, the dominance of flat plate collectors in Russia is mainly due to the amount of heat they generate in wintertime. It is significantly higher than the quantity produced by vacuum tubes, as snow and frost can be removed more easily from the former. Unglazed solar collectors for swimming pools have not yet gained much popularity across the country. The same is true for air collectors, which are manufactured and distributed in limited numbers, mainly throughout the Republic of Buryatia, close to the Mongolian border.
Two large solar fields made in Germany
The article by the Kuban State Agrarian University also analysed two of the largest solar thermal systems in Russia: A solar district heating plant commissioned in 2013 in Narimanov, in southern Russia, near the Caspian Sea (see hydraulic diagram at the top) and a 600 m² solar field installed in 2012 in Ust-Labinsk, a town in the Krasnodar region.
The first system, put up by Russian engineering firm Thermo-Technology, consists of four Buderus Logasol solar fields, which heat water in two storage tanks, each with a capacity of 500 m³. This heat is later injected into the pipelines of a nearby district heating system, which is backed up by a 30 MW gas boiler. The second system, built by Russian-based solar thermal system supplier Yuzhgeoteplo, uses collectors delivered by Wolf Heiztechnik, and is operated via a controller made by Resol, both companies based in Germany. According to the article, it supplies thermal energy at a temperature of 60 °C, generating 427 MWh a year. This corresponds to a specific yield of 712 kWh/m²a.
This article was written by Eugene Gerden, a Moscow-based freelance journalist specialising in renewable energies.
Organisations mentioned in this article:
Yuzhgeoteplo, Krasnodar, Russia: +7(861)225-41-83 (no website available)
http://termo-tehnologia.ru/.
http://www.kubsau.ru/en/
https://jiht.ru/en/about/
http://en.sunrain.com/
https://www.bosch-thermotechnology.com/corporate/en/startpage.html
https://www.atmosfera.ua/ru/
https://solarthermalworld.org/wp-content/uploads/2019/06/russian_report_2018.pdf