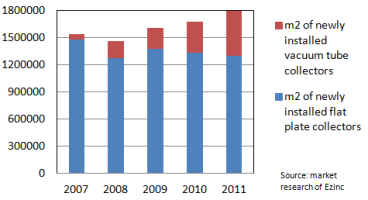 Vacuum tube technology is gaining influence on the Turkish market. Between 2007 and 2011, the share of vacuum tubes among the total newly installed collector area in the country increased from 4 to 28 %, according to the market statistics of Hakan Alas, General Manager of Ezinç Metal. Solarthermalworld.org spoke to the manager of the largest solar thermal manufacturer in the country and asked him about the market research he has been carrying out since 2000, as well as his thoughts of the latest developments in the market.
Source: Ezinç Metal

Solarthermalworld.org: Vacuum tube collector systems are being sold at a cheap price. Does this force the national flat plate collector manufacturers to reduce prices as well?
Alas: Strong price competition has been nothing new in the Turkish solar thermal market. But, the vacuum tube systems have been affecting flat plate collector prices. On the other hand, the import tax that was implemented in July 2011 made importers move system production to Turkey last year. This reduced the price gap somewhat. Almost all of vacuum tube systems sold on the market today are Made in Turkey.

Solarthermalworld.org: Does this mean that manufacturers are now starting to produce glass tubes?
Alas: Exactly. One company already began to produce vacuum tubes last year. Now, there are two more producers which announced that they will start their own serial production of tubes this summer. In fact, the national thermosiphon system suppliers have already been familiar with producing a vacuum tube system’s hot water tank, support base, fittings etc. So, it was no complicated task for them to change from imported tubes to locally produced ones.

Solarthermalworld.org: Which methodology do you use for your market statistics? Asking competitors for produced quantities is probably not the right way?
Alas: We don’t ask competitors for their produced quantities. We have a comprehensive group of indicators corroborating each other. They include specific indicators from the industry, finance, end consumers, customs statistics, etc. For example, it is relatively easy to track imported vacuum tubes. We first extract the total value of vacuum tube imports from the customs figures in USD and then calculate the total number of imported vacuum tubes.

Also, by being the biggest manufacturer, we are right at the core of the market. We started this study in 2000, in order to estimate the market size of flat plate collectors for ourselves and we have been improving on these statistics year by year. We don’t claim that the figures are 100 % correct. But, we believe that we have the most comprehensive study on the Turkish market and the figures are as close as you can get to the actual ones.