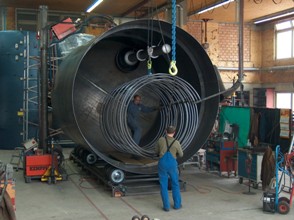 Orders for large solar storage tanks are on the rise: Swiss Jenni Energietechnik AG is currently expanding its production capacity to meet the greatly increased demand. At its Oberburg headquarters, the solar company is constructing a new building for the manufacturing of large storage tanks. According to CEO Josef Jenni, the additional facility will enable the company to produce five times as much as before.
Photo: Jenni Energietechnik AG

Whereas in many places in Europe, the solar thermal industry is experiencing declining sales, Jenni Energietechnik can’t complain about a lack of projects. “Currently, our 70 employees have to work overtime to finish all storage tank orders,” explains Josef Jenni. “In recent years, the need for large solar storage has grown rapidly. Our production capacity is fully stretched at the moment.” Two-thirds of the tanks manufactured by Jenni Energietechnik are sold on the domestic market, one third is exported.

In close vicinity to the two existing office buildings in Oberburg, a third production facility is now under construction. The investment volume for the 3,000 m² building amounts to CHF 10 million (EUR 8.08 million). The ground-breaking ceremony took place in December 2010 and the first part of the building will be finished in 2012.

Large solar tanks with a volume of 5 to 200 m³ are primarily used in so-called “solar houses”, in which at least 50% of the energy required for heating and hot water is generated by solar energy. “A solar house offers a largely autonomous heat supply independent of future energy shortages and rising energy costs,” says Josef Jenni. The new production facility is a showcase in energy efficiency: A good thermal insulation and other advantages keep energy demand low. The required heat is generated by a solar system in combination with a wood chip heating installation.

The Swiss solar thermal association Swissolar confirms the positive development of collector sales in 2011. A survey by British market research institution BSRIA about the sales of main producers and importers of collectors in Switzerland in the first half of 2011 shows that the stagnation of 2010 is likely to be overcome. Swissolar expects a market growth of more than 10%, which corresponds to an area of 160,000 m2. This would lead to an overall installed collector area of around 950,000 m2 by the end of 2011.

Swissolar CEO David Stickelberger emphasises the importance of steadily continuing the existing support measures in order to keep market development positive in the future. “The relatively high initial investment in a solar system still deters some clients, although the system generates an almost free energy supply for 25 years,” states Stickelberger. “A stop-and-go uncertainty would irritate builders and make it difficult for suppliers to gain their know-how.” In 2010, all Swiss cantons were finally funding solar collectors (see http://www.solarthermalworld.org/node/1591). This stability, however, will not last for long: The canton of Schwyz decided in July not to continue its programme. And in Canton Zug, the funds are temporarily exhausted.