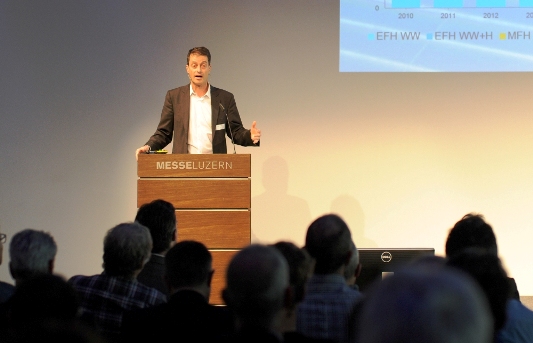 On 24 November, the fifth Solar Heat Switzerland (Solarwärme Schweiz) conference organised by the solar industry association Swissolar, the building services association suissetec and the Federal Office of Energy was held in Lucerne, Switzerland. As 2017 funding for solar heat incentives remains in doubt in several cantons and the priorities of the country´s energy policy haven’t been announced yet, the market outlook for solar thermal has not been very encouraging. But there seems to be a ray of hope in the form of low-temperature collectors for borehole regeneration and solar district heating. Click here to download the German-language presentations from the conference.
Photo: Swissolar
The event with 130 attendees took place just a few days before the Swiss referendum on an accelerated nuclear energy exit, which gave the organisers an opportunity to highlight the sun’s role in Switzerland’s energy transformation. “As about 10 % of the heating energy in Switzerland comes from electricity, solar thermal can help with replacing nuclear power,” said David Stickelberger from Swissolar. The strategy assured increased media attention for solar thermal, but interest dwindled soon after the 27 November referendum, when the nuclear energy exit was rejected by Swiss voters.
Cantons wait for energy policy priorities
The political circumstances have cast doubt on the future of solar heat. Half a year ago, cantons Zurich and Zug had announced that they would not be able to finance solar thermal incentives in 2017. And the commitment to Switzerland’s energy strategy 2050 has been put on shaky ground. A vote is scheduled for 21 May 2017, in case opponents of the strategy can gather 50,000 signatures by 19 January next year. “As the political situation remains unclear, cantons are postponing their decisions,” said Stickelberger. According to current planning, the Energy Strategy 2050 is thought to enter into force in 2018. Its aim is to increase the use of renewable energies, including hydropower and the uptake of energy efficiency measures. The energy strategy will not permit the construction of new nuclear power plants, but will not limit the lifetime of the existing ones either. The strategy will also lower the CO2 emission limits of vehicles. The most important issue will be additional solar thermal funding from canton governments to incentivise the implementation of energy efficiency measures – including solar heat – in buildings.
Right now, solar heat is coming under fire from two sides: First, there is the cantons’ responsibility for the incentive schemes. The Harmonised Incentive Model (Harmonisiertes Fördermodell, HFM) requires that they all follow the same policy. But given budget restrictions, they have been waiting for the authors of the energy strategy to set priorities before they put aside money for solar thermal incentives. Second, the cantons have to integrate nationwide building energy standards (MuKEn). This means that cantonal law is to stipulate a certain share of renewables that needs to be met when renovating existing building stock. But like the debate about incentives, this one will only be resolved if there is a clear-cut and comprehensive energy strategy in place.
PVT or unglazed collectors to regenerate borehole energy storage
But Stickelberger also pointed to two technologies which give him hope for the future of solar thermal in Switzerland. One is the combination of solar collectors with ground-sourced heat pumps. Pumps which retrieve energy from boreholes are becoming increasingly popular across the country. The city of Zurich in particular set a 2050 target of 450 GWh/year for energy production based on ground-sourced heat pumps as part of its efficiency scenario A from the 2050 energy plan. But experiences and simulations by the Swiss-based SPF – Institute of Solar Technology show that especially in areas with high borehole density, they gradually cool the ground unless an active regeneration method is used to return heat to it in summer (see the attached study in German).
“Unglazed solar collectors are one option to regenerate boreholes,” explained Stickelberger. Other options are PVT collectors, which typically work at low temperatures, or conventional collectors if operated intentionally at around 25 °C. The heat pump itself can also be used for regeneration and the transfer of heat from a building or the surroundings into the ground in summer. At the conference, René Naef from Swiss engineering office naef energietechnik presented the regeneration results of nine borehole locations used to heat three multi-family properties in Mettmenstetten. After one year of operation, the temperature of boreholes using regeneration was 2 K higher than the one of surrounding buildings.
Biomass and solar heat for rural district heating networks
The second technology is district heating. Unlike Denmark, Switzerland has not seen much interest in district heating systems. In the cities, most networks are fed with heat from waste incineration. This type of heat is available all year round at low cost and gives solar feed-in little chance to compete. However, there are also several hundred rural district heating networks, mostly supplied by biomass boilers. At the conference, Michel Haller from the SPF Rapperswil presented a study on the potential of retrofitting these networks with solar thermal technology.
One very attractive project might be the supply of wood- and solar-based heat to the district heating network of the Beznau nuclear power plant in northern Switzerland. It has so far been powered by waste heat from one of the world´s oldest nuclear power stations. Reactor unit 1 dates from 1969 and has been turned off for safety review. After several delays in getting it back onto the grid, doubts are growing whether it will ever be operational again. Unit 2 from 1971 cannot provide enough heat for the entire year, meaning additional boilers are needed. The SPF Rapperswil and the association Wood Energy Switzerland have carried out a study to explore the options available for integrating solar and biomass into the network. “The operators have shown interest in both solar and biomass heat,” said Stickelberger.
Websites of institutions and associations mentioned in this article:
Swissolar: http://www.swissolar.ch
SPF Rapperswil: http://www.spf.ch
Suissetec: https://www.suissetec.ch/
Wood Energy Switzerland: https://www.holzenergie.ch/home.html
naef energietechnik: http://www.naef-energie.ch/
Swiss Energy Strategy 2050 (in German):
https://www.uvek.admin.ch/uvek/de/home/energie/energiestrategie-2050.html
https://solarthermalworld.org/wp-content/uploads/2016/12/schweiz_regenopt_schlussbericht_2015.pdf