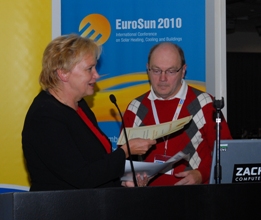 Clearly committed to solar energy: During the Eurosun 2010 conference in Austria, ISES Europe President Dorota Chwieduk presented the ISES Europe Award 2010 to Jan-Olof Dalenbäck for the media campaign of Svensk solenergi (Solar Energy Association of Sweden). The award includes EUR 1,000 of prize money and recognizes outstanding promotion activities in the field of solar thermal and PV between 1 January 2009 and 1 May 2010.
Photo: Eurosun

Svensk solenergi carried out a well planned and successful media campaign in favour of national targets for solar energy in Sweden. The campaign started in early 2009, after the association initiated a cooperation with Swedish PR agency Westander with the objective of increased exposure and lobbying for solar energy in time for the national elections in September 2010.

“Solar energy has been on the agenda for decades, but with very low interest among the public and politicians,” Jan-Olof Dalenbäck, Secretary of Svensk solenergi, explains. “The coverage in the media was poor and misleading. Sweden’s share of renewable energy in the total energy supply is above 40%, but there are no national plans for solar energy.”

Svensk solenergi started lobbying in April 2009. Since then, the association has placed a series of articles in newspapers, technical journals and online magazines, organized a seminar for politicians, and arranged a meeting with the Swedish Energy Agency to discuss the National Renewable Energy Action Plan (Directive 2009/28/EC). The association also created a questionnaire comprised of 5 questions on solar energy policy (plans, support, etc) and sent it (in cooperation with a number of other, non-solar associations) to 494 politicians nominated for the elections to parliament in September 2010. 277, or 56%, of the politicians returned a filled-in form.

“The coverage in the media was better than expected and Svensk solenergi has managed to become a more widely recognised stakeholder in energy policy issues in a rather short period and for a relatively small amount of money,” Dalenbäck describes the results of the campaign, which is going to cost about EUR 40,000 in 2010, after EUR 30,000 were spent in 2009. “The questionnaire to nominated politicians turned out to be a success, because a large majority voted for national targets and further financial support for solar heating and PV systems, which might result in an extension of the support scheme in 2011.”

The National Renewable Energy Action Plan published 30 June 2010 does not include an action plan for solar energy yet. Sweden aims at a share of 50% of renewable energy by 2020 without solar energy, but indicates that the government will ask the National Board of Housing, Building and Planning (Boverket) and the Energy Agency to present a plan for developing solar as well.

“Our campaign reached a peak before the elections, but will continue,” promises Dalenbäck, “until, hopefully, we have a national plan for the development of solar energy.”

The ISES Europe Award for the most outstanding activity is presented every two years in the framework of  Eurosun – which means the next one will be due in 2012.