At a workshop set to take place on 4 and 5 April in Graz, Austria, the IEA Solar Heating and Cooling Programme will launch a new research platform about Efficient Solar District Heating Systems, also called Task 68. About 30 mostly European solar heat experts have worked 12 months on setting up a workplan for the three-year programme, which will end in March 2025. Focus areas will include medium-high temperature feed-in and digitalisation. Regarding the latter, the task members will take an especially close look at advanced control strategies, automated monitoring and open data, with the aim of exchanging best practice examples. And, for the first time, a solar heat technology provider will lead the knowledge-sharing activities.
Photo: Absolicon Solar Collector

“We will have a very strong focus on a systems approach. We would like to work on efficient hybrid solutions that use solar energy combined with other technologies to provide the supply temperatures required by a heat network,” explained Viktor Unterberger, who will chair Task 68 and is a senior researcher on Automation and Control at the Austrian BEST – Bioenergy and Sustainable Technologies centre of excellence. Those interested in joining the kick-off workshop in April can send him an email for more information: viktor.unterberger@best-research.eu.

Unterberger is being supported in his efforts by experienced IEA SHC solar heat strategists: Sabine Putz, of SOLID Solar Energy Systems, Austria, and Magdalena Berberich, of Solites, Germany, will both be subgroup leaders. Both were also members of previous Task 55 on Large Solar District Heating and Cooling Systems. A new subgroup leader will be Joakim Byström, of Swedish company Absolicon.

“In Task 68, we will concentrate on gathering information about exceptional SDH demo plants and on supporting joint marketing efforts for SDH in regions with a high density of district heating networks,” Byström said about his objectives. For the first time, a technology provider will head the dissemination activities within an IEA SHC task. This will bring a new level of quality to outreach efforts, especially because of Absolicon’s wealth of experience in marketing and lobbying.

One of the things that Absolicon has been campaigning for in Sweden is an SDH support scheme. The country in northern Europe has already had a fairly green district heating sector, with wood meeting more than half of all district heating needs nationally. But now, Sweden has a supply chain problem when it comes to local, sustainable biomass, as the country also wants to replace transportation fuel and high-temperature heat sources in industry with biomass-based energy carries.

Absolicon’s slogan “Stop burning wood in summer” has therefore been well received by policymakers. “The Green Party have put our call for a 50 % subsidy scheme for large solar district heating plants high on their agenda,” said Byström. “We are now pointing to the example of a raised budget for large-scale solar heat plants in Austria while also calling for financial support for feasibility studies.”

Another campaign milestone has been met thanks to a recent Swedish Energy Agency study. Published in December 2021, the study showed that solar thermal has the greatest chance of competing for a place in smaller district heating networks that burn pellets or briquettes in summer. The agency modelled solar heat costs for a variety of scenarios, to determine under which conditions the technology becomes profitable enough to replace biofuel in summer. In the base scenario, the solar heat potential amounts to 170 GWh; in the advanced scenario, it reaches up to 6 TWh.

Of course, Unterberger knows that SDH marketing slogans need to be adapted to different national contexts. In countries where biomass energy is not used as widely as in Sweden, biomass boilers and solar could be a suitable combination for providing green heat. One crucial argument for the promotion of solar district heating could be a high dependency on gas imports from geopolitically critical countries, such as Russia and Algeria (see chart below).

Infocharts in general play a key role in Absolicon’s communications strategy. The company has created a number of easily accessible materials to explain the benefits and features of solar district heating to newcomers: 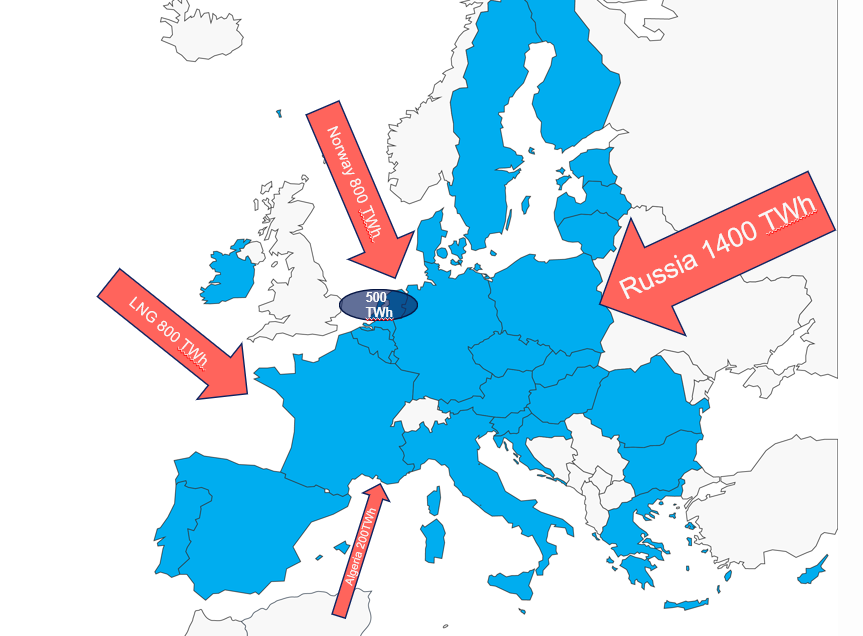 To learn more about how to join Efficient Solar District Heating Systems, do not hesitate to contact Viktor Unterberger at viktor.unterberger@best-research.eu.