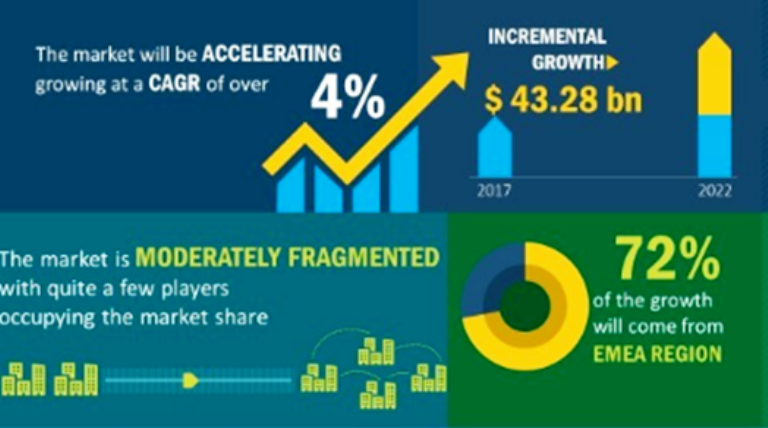 A new report published in December 2018 expects the global district heating market to grow by over USD 43.2 billion between 2018 and 2022, at an average rate of around 4 % a year, with the key driver being the implementation of district heating projects in smart cities. Consequently, heating capacity based on renewables would increase even faster by, on average, 7.4 % annually over five years. The 104-page document, titled Global District Heating Market 2018-2022, is UK-based Technavio’s first about the technology and is available to buy online. (Chart: Technavio)

The report said significant investment was being made to develop smart cities in multiple countries around the world, with its authors stressing that high-capacity heating boilers and chillers could be more cost-effective and generate lower emissions than individual heating systems, even if based on fossil fuels. Therefore, heat distribution networks would help smart cities generate energy savings, especially if they used solar, geothermal or biomass. Those technologies would then fuel an increase in turnover from renewable district heating and turn a market worth USD 21 billion in 2017 into one of USD 30.03 billion by 2022 (see the following table).

Renewable district heating systems captured 11.4 % of the global district heating market in 2017.
Source: Technavio
In addition to a global perspective, the authors offer views on regional market trends in the five-year period. In 2017, it was EMEA, short for Europe, Middle East and Africa, that dominated the sector by taking a 64 % share of the world’s district heating market. The Asia-Pacific Economic Cooperation (APEC) and the Americas came in second and third, respectively.
The report describes the industry as moderately fragmented, with quite a few large businesses competing for customers. Section 14 analyses five leading heat utilities in Europe and the United States, as well as their position in the market.
Key data on 5 European and US energy and utility companies analysed in the Technavio report.
Source: Companies’ websites
The report identified Russia, China, Ukraine, Poland and Germany as the world’s five largest markets. When Technavio’s analysts were asked why other sources consider China to be the biggest district heating market globally, the answer was: “Russia is the largest market due to high demand for heat, whereas China is growing too and has a huge network of district heating systems in the country.”
Surprisingly, the United States was not among the top five countries in the report. This is in contrast to 2017, when the road map for Renewable Energy in District Heating and Cooling published by the International Renewable Energy Agency (IRENA) showed more district heating capacity installed in the US than in Poland or in Germany.
Energy and utilities are two of the industries about which Technavio has reported in the past. Others are communication services, information technology and health care. The company has a network of over 500 industry experts with deep knowledge of over 50 countries and has published more than 10,000 reports to date, according to its website.
Further information about the report: https://www.technavio.com/report/global-district-heating-market-analysis-share-2018
Organisations mentioned in this article:
https://www.technavio.com/
https://www.fortum.com
https://www.woodplc.com
https://www.vattenfall.de/
https://www.nrg.com
https://ramboll.com/