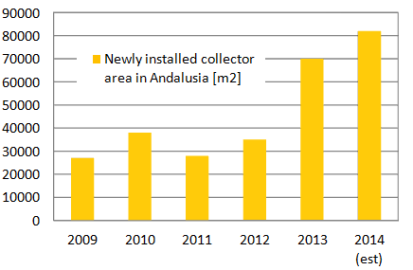 The good results achieved by the Andalusian solar thermal incentive scheme, Prosol, have encouraged the regional government to extend the programme, but only until June 2015. Prosol subsidies cover up to 40 % of the investment costs in new solar thermal systems. The Andalusian market contributed roughly one-third to the entire newly installed capacity in Spain in 2014.
Source: Energy Agency of Andalusia and own calculations
Business development in the Spanish solar thermal market does not only depend on the economic or political situation, but also on regional subsidy policy. While some regions show an entirely decreasing market, others – such as Asturias, Valencia or the Canary Islands – have approved regional incentives to ensure that the market keeps stagnant or growing during the on-going severe recession. Without a doubt, Andalusia has been the champion of this local incentive policy-making.
Uncertain incentive future
On 24 December, the Energy Agency of Andalusia announced that it would extend the A+ Energy Saving at Home programme until 1 June 2015. The Prosol incentive scheme, which was due to end on 31 December 2014, is part of this programme.
Sector representatives, however, feel uncertain about the future of solar incentives beyond June 2015. Pascual Polo, General Secretary of the Spanish solar thermal association, ASIT: “Nobody except the regional government knows which incentives will be in force after June. We are keen to know, since Andalusia is very proactive in this segment and fosters the growth of the entire national market.” Jose Fernández, Technical Director at the leading Andalusian solar thermal manufacturer, Novasol, adds: “We believe that the government is planning a new incentive scheme that is going to replace Prosol after June, although we don’t know for certain.”
Since 2009, the Andalusian Prosol programme has been offering direct subsidies to cover up to 40 % of the cost of a solar thermal system, with incentives capped at EUR 12,000. Since its start, the successful scheme has helped install 280,000 m² of collector area across the region. The Andalusian government spent over EUR 50 million in solar thermal subsidies during the five-year period. By late 2013, the newly installed annual collector area in Andalusia was estimated at 60,000 m². Year-end figures showed almost 70,000 m², however, which meant a contribution of around 30 % to Spain’s entire market volume (228,721 m²), despite Andalusia being home to barely 17 % of the country’s total population. Stakeholders expect that the 2014 market volume may even exceed 80,000 m², although the programme’s administrators will still have to confirm this figure.
After five years in recession, the Spanish solar thermal market seemed to be slowly recovering in 2013 (1.5 %). Polo says that although the final figures for 2014 will be published by the end of February, their early estimates show further small growth on the national market.
More information:
http://www.agenciaandaluzadelaenergia.es
ASIT: http://www.asit-solar.com