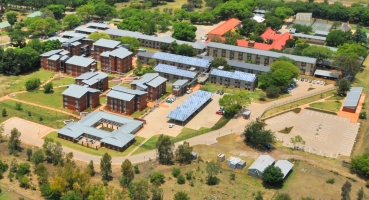 The University of Pretoria is extending its Onderstepoort campus and this extension also includes a 672 m² solar thermal system. The system provides warm water to the new energy-efficient flats accommodating a total of 550 students. Onderstepoort – or OP, as it is commonly known – is located in Pretoria North and is home to South Africa´s only Veterinary Institute. Holms and Friends, formerly Omnibus Engineering, has recently completed the university project. With it, the member of the Sustainable Energy Society of Southern Africa (SESSA) has just set up one of the currently largest glazed installations in Southern Africa.
Photo: Holms and Friends

Onderstepoort is part of the northern Middle Veldt, a South African region known for its distinctly rainy and dry seasons. Temperatures vary greatly throughout the day and the strong solar radiation can be felt across the entire part of the country. Accordingly, Holms and Friends made use of flat plate collectors by Chinese manufacturer Sunda Solar, because Onderstepoort´s immense solar radiation would make more expensive vacuum tube collectors an unlikely alternative.

336 collectors were installed in 4 arrays on top of the buildings and the campus carport. The collectors are each 2 m² in size, amassing to a whopping 672 m² of collector surface. On the roof, 3 collectors are always connected in parallel. Two parallel strings of collectors are then connected in series, resulting in a thermal length of 12 m. One central feeder tube transports the warm water to a building which was set up next to the carport and has been especially constructed for the SWH system. This building contains the heart of the system – among other things, two giant 20,000 litre water storage tanks, an expansion tank, membrane expansion vessels (totalling 5,400 litres) and 7 external heat exchangers.

The giant buffer tanks store the water heated by the solar panels, while external heat exchangers warm up the fresh-water supply and distribute it to the individual consumers. Such an indirect loop system has the advantage that the stored water, which is heated by the panels, automatically complies with current health standards. The tanks do not have to undergo major maintenance, because the water in them will never be used for human consumption. A pump circulation then distributes the tank water. The heavily insulated pipes of 40 mm in diameter which are used for the circulation are mounted on steel frame structures, reaching each flat on the campus.

The back-up system consists of a normal, grid-connected electric heating. But a back-up has not been necessary so far – after all, the solar system has only been in operation for six months. According to the manufacturer, the installation’s capacity of 430kWth, would save 404,700 kWh of electricity per year. By using solar water heating, 450 tons of CO2 would be avoided and 600,980 litres of water saved as part of electricity generation. “The savings are remarkable, the system is fully functional and a pleasure to watch”, Alec Blackhall, Manager Residence Affairs and Accommodation Provision at the University of Pretoria, says. The total costs of the solar thermal system, including storage tanks and engineering, amount to ZAR 6,129,000 (EUR 613,000). It was financed by the Pretoria university’s Student Accommodation Department.

Holms and Friends was formed in 2003, after merging the special expertise of three companies, which (at that time) have had experience in the related industry for over ten years. The company specialises in integrated energy strategies, and Engineering, Procurement and Construction (EPC) of large-scale, commercial solar water heating and photovoltaic systems. They also provide training in the field of renewable energy and energy efficiency, as well as education in sustainable development.