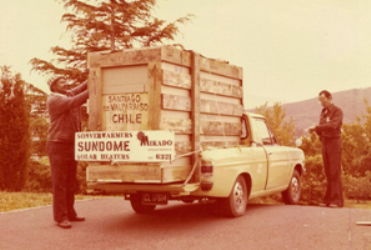 After 42 years in the business, South African solar thermal pioneer Solardome SA had to shut down its manufacturing operations at the end of last year. The name Solardome – formerly Mikado – stands for more than four decades of collector manufacturing in South Africa (see http://www.solarthermalworld.org/node/1346). Managing Director Tertius Lindenberg holds ESKOM’s rebate programme responsible for the trouble that his company and some other local manufacturers are in at the moment. The rebate scheme of South Africa’s main power supplier had resulted in a flood of cheap imports, which compete with local production.
Photo: Solardome

“Unfortunately, the price outweighs most other factors in business. With the ESKOM rebate programme in place, the market was flooded with cheaper imports,” explains Lindenberg. “Anyone with a pocket full of money and a circle of friends became a ‘solar expert’, which resulted in a huge oversupply on an artificially stimulated market.”

Already in last November, the Sustainable Energy Society of Southern Africa (Sessa) blamed the cheap imports flooding the South African market to be the main reason for the current crisis in the local industry, according to an article on news platform http://www.engineeringnews.co.za. Other crucial factors are regulatory constraints and – consequently – high production costs.

According to Lindenberg, cheaper imports with no or little taxation protection were the No 1 cause, mainly because of how South Africa’s own businesses are forced to operate. Lindenberg gives the following reasons for why products are relatively more expensive in South Africa compared to less regulated countries:

In essence, the ESKOM subsidy requires a company to be a member of SESSA and comply with the SABS (South African Bureau of Standards). “Our SABS testing gets done about 1,400 km away from us,” criticises Lindenberg. “The yearly cost per system and re-testing of each system means high expenses and costly logistics. According to our books, we have spent EUR 55,000 to date on SABS compliance. On the other hand, our market is very small compared to Europe and we probably have only had 300 systems installed under the rebate programme.”

These complaints resemble the ones SESSA has made about the currently high-priced testing. “It is true that the testing is very expensive,” states SESSA chairman Henning Holm, “especially considering the industry has arranged for the testing rig via UNDP funding and SABS got it for free. Competition is urgently needed in this field.”

Solardome had a company spin-off a few years ago, called Sunflare Renewable Systems, which has continued to offer photovoltaic-related, solar cooking and wind power products until today. Since 1 March 2012, Sunflare Renewable Systems has additionally been selling the Solardome SA solar thermal products which the company had still in stock. All warranty issues from product previously sold by Solardome will now be taken over by Sunflare RS.

“Sunflare RS will keep our entire product range and probably offer even more than what was previously supplied by Solardome. Still, the main focus will shift from manufacturing to retail and trade,” explains Lindenberg. “All of the machines and tooling will be sold over time. As the saying goes, ‘if you can’t beat them, join them’.”