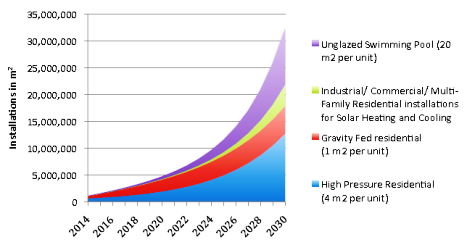 Around 21 GWth (30 million m² of collector area) are to be installed in South Africa by 2030 – half a square metre per inhabitant. More than 200,000 additional jobs could be created by then. These are the ambitious targets of the South African Solar Thermal Technology Roadmap, SA-STTRM. It is a challenging target when compared with the only around 2.3 million m² which were installed in the country by 2014, but a realistic one when compared with the current deployment rates of countries such as Cyprus with 0.6 m²/head or Israel with 0.54 m²/head at the end of 2013. The chart shows the projected total solar thermal collector area between 2014 and 2030 based on the aim of reaching 0.5 m² of installed collector area per inhabitant by 2030.
Chart: Roadmap draft from March 2015

The creation of SA-STTRM has been a long interactive and participative process involving all interested parties from science, government, financial institutions, and industry. Three open workshops were part of the programme; one held in Pretoria on 17 March 2014, one in Cape Town in November 2014 and one in the city of Midrand, Gauteng, in March of 2015. A provisional draft of the roadmap from March 2015 has been attached to this news article. The SA-STTRM will be a sub-component of the Solar Energy Technology Roadmap, which has been compiled jointly by the Department of Energy and the Department of Science and Technology, but has not been released yet.
The need for an increased deployment of solar water heaters in South Africa arises from the overburdened electricity sector: The country is facing an enormous power deficit, and nearly 90 % of electricity demand is met by coal. As 40 to 50 % of this demand in the residential sector is used to heat water, solar thermal has become one of the major cost-effective and quick solutions to reducing the national demand for electric power. The roadmap gives an analysis of technological, legislative, regulatory and other barriers which need to be overcome to speed up solar thermal deployment. The authors of the document identify five different types of application (see the following table) and develop an individual roadmap for each of them, as well as combine these plans into one technology roadmap in the last chapter.
Roadmap figures on existing solar thermal systems, according to the SA-STTRM draft from March 2015
The roadmap also includes a table describing support measures for each application and actions to be taken by different stakeholder groups, be it industry, government or research institutions.
SA-STTRM is a project by the South African Solar Thermal Technology Platform, SA-STTP, which was launched in 2013. The drafting of SA-STTRM was supported by the Centre for Renewable and Sustainable Energy Studies at Stellenbosch University, the Sustainable Energy Society of Southern Africa, the Austrian embassy, as well as Austrian research institute AEE INTEC.
More information:
http://www.aee-intec.at/
http://sessa.org.za/
http://www.crses.sun.ac.za/
https://solarthermalworld.org/wp-content/uploads/2015/09/sa_sttrm_provisional_version_10_march_2015.pdf