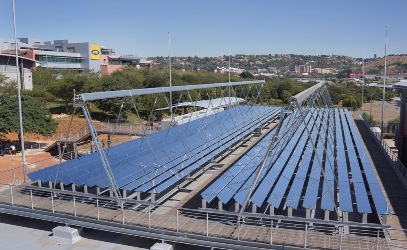 Since June 2014, a Fresnel collector field with 242 kWth has been feeding into the district cooling system of the MTN Group at its headquarters in Johannesburg, South Africa. MTN, which has more than 200 million customers, as well as subsidiaries in 22 countries across Africa and the Middle East, is one of the leading mobile operators in South Africa – and it is aware of the impact of global warming. “We continuously explore ways in which we can lessen the impact of our operations on the environment. This initiative will not only reduce our carbon footprint but it will substantially reduce our electricity consumption, which will release additional capacity for the national grid,” MTN’s CEO, Zunaid Bulbulia, was quoted as saying in a press release from 17 July 2014. The concentrating solar thermal plant powers the double-effect absorption chiller whose cooling capacity of 330 kW keeps temperatures low in the data centre at MTN’s head office.
Photo: Industrial Solar
The installation is part of the Solar Roofs Programme coordinated by the German Energy Agency, dena, which has been setting up showcase projects in potential export markets for manufacturers of solar thermal and other renewable energy systems. The MTN installation has already been the fifteenth solar thermal “roof” within the dena programme since 2008. A total of 56 projects – mostly photovoltaic installations – have so far been subsidised by the German Federal Ministry for Economic Affairs and Energy, with each subsidy covering 45 % of the total investment costs. In general, the other 55 % have to be covered by the partners from the industry.
Rising energy prices and decreasing costs are improving system economics
The initiator of the innovative solar installation was Reach Renewable, a South African subsidiary of the Swiss Reach Group, which focuses on designing, building and operating renewable energy systems. “In South Africa, solar cooling has not yet been in widespread use. Still, the country offers a lot of potential because of its excellent solar resources. Rising energy prices and decreasing system costs are improving system economics, and a renewable energy system is becoming an attractive investment,” Frank Major, Managing Director of Reach Renewable – South Africa, explains.
German collector manufacturer Industrial Solar, which supplied the Fresnel collectors, sees itself as a provider of integrated solutions. “To significantly increase the local content of our products and reduce the time and costs of future projects, we have placed great importance on training local partners and ensuring supplier qualification,” Tobias Schwind, Managing Director of Industrial Solar, explains. The Fresnel collectors heat up the pressurised water in the receiver pipes to 180 °C before the water is being fed into the absorption chiller. From there, chilled water is transported to the data centre. The solar-powered chiller’s backup consists of conventional compression chillers, which receive their electrical power from an onsite cogeneration system.
The solar thermal segment of dena’s Solar Roofs Programme began with two small solar thermal installations for the German International School in Jakarta, Indonesia, in 2008. A larger solar thermal system, the 141 kWth installation for the Talitha Kumi School in Beit Jala, Palestine, followed in 2009. The largest system to date was installed in 2010: The 364 kWth vacuum tube collector field provides heating and cooling to an Oxford Gardens Retirement Village. In 2013, Bosch Solarthermie set up a flat plate collector installation with 300 kW at the premises of Brazilian aircraft producer Embraer. The MTN installation in South Africa is the first solar thermal concentrating project supported by the Solar Roofs Programme.
More information:
http://www.dena.de
http://www.mtn.com
http://www.reach-renewable.com
http://www.industrial-solar.de/
Database of Solar Roofs Programme (in German): http://www.export-erneuerbare.de/EEE/Navigation/DE/Angebote/Auslandsmarketing/Referenzprojekte/Solardachreferenzen/solardachprogramm.html&nbsp;