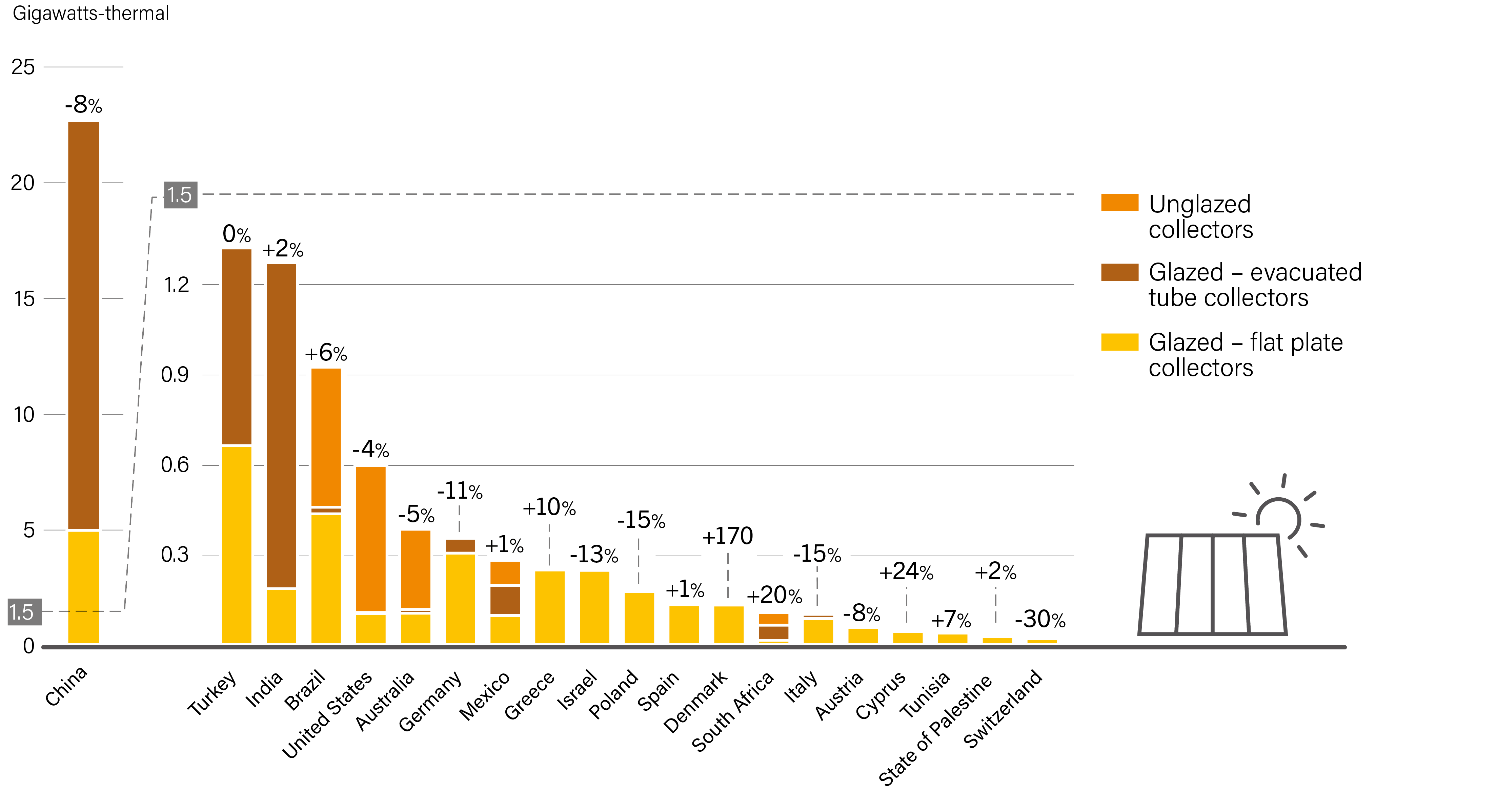 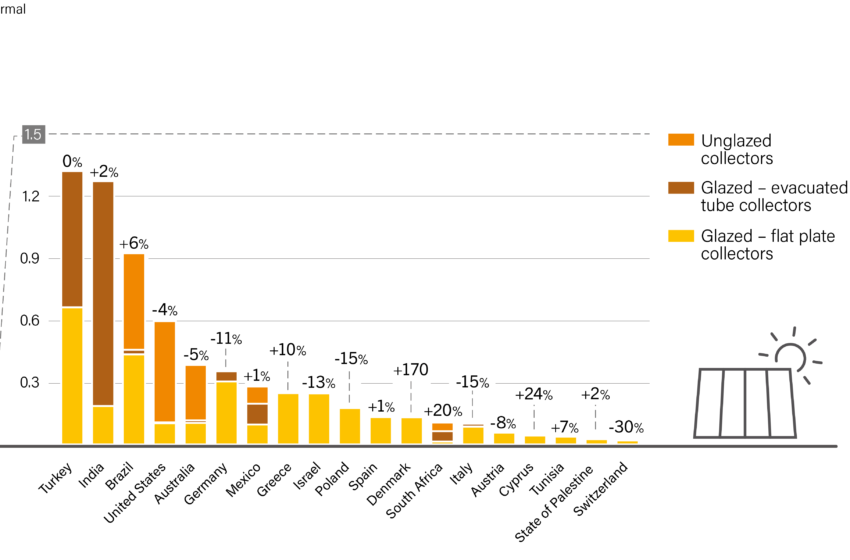 China again led the ranking for new installations of glazed and unglazed collectors – accounting for 73% of the total – followed by Turkey, India, Brazil and the United States. Additions in the largest solar heating and cooling markets besides China remained stable, with noteworthy growth in Brazil (+6 %), Cyprus (+24 %), Denmark (+170 %), Greece (+10 %), South Africa (+20 %), and Tunisia (+7%) balancing declines in Australia (-5 %), Austria (-8 %), Germany (-11 %), Israel (-13 %), Italy (-15 %), Poland (-15 %) and Switzerland (-30%). The chart taken from the Renewables 2020 Global Status Report shows the gross additions in GWth in 2019 for the 20 largest markets. You find the absolute figures in table R18 attached to this news.
Increasing demand for flat plate collectors
The share of vacuum tube collectors among the new additions illustrated in the chart above fell to 67% in 2019, from 72 % in 2018, due to increased demand from the Chinese construction industry for flat plate collectors both for facade integration and central collector fields. Flat plate collectors reached a 28 % share in the world’s 20 largest solar thermal markets (up from 24 % 2018). Unglazed collectors were used in 5 % of the newly added capacity last year.
Diversified collector technologies
In addition to the three main collector types, other technologies such as PVT, concentrating and air collectors are increasingly used to meet specific energy needs of clients, but still on a small level, that’s why they are not yet included in global and national capacity statistics. As of the end of 2019, PVT technologies provided 608 MWth of thermal capacity for space and water heating. In addition, around 554 MWth of concentrating solar thermal capacity provided hot water or steam for commercial and industrial customers. An estimated 1.1 GWth of air collectors for drying and space heating was in operation at the end of 2018 (latest data available).
Growing markets in 2019 due to regulatory policy
When analysing the growth factors in the increasing markets 2019, it becomes evident that regulatory policies drive demand like for example in Denmark and South Africa.
Denmark had a strong year for new solar district heating installations, bringing online 10 new plants and expanding 5 existing once, for a total of 134 MWth added. All plants were put in operation in the first half of 2019, because the energy-saving agreement between Danish district heating utilities and the energy ministry ended in July 2019, which allowed utilities to count solar district heating capacity to fulfill their energy saving obligations.
In South Africa the national building regulation together with increasing electricity prices have led to a boost in the number of solar water heater systems supplied to single-family homes. The building regulations, called SANS 10400–XA, became affected in September 2014 and stipulate that at least 50 % of hot water demand must be met by devices that are not electric resistance heaters. This requirement extends to both newbuilds and houses that are soon to be renovated, provided such renovation needs approval by local planning authorities.
Brazil added 0.93 GWth of solar thermal capacity in 2019, up 6 % from the previous year. The growing construction industry and increasing demand from new commercial customer groups with high hot water demand – such as restaurants, spas and laundries – contributed to this surge, which followed four years of continuously declining sales in the country.
We also recommend to read solarthermalworld.org news articles that analye the positive development 2019 in other major markets such as Cyprus, Greece, India and Spain.
This news is based on the Solar heating and cooling market and industry chapter of the Renewable 2020 Global Status Report pages 124 to 130. Use the searchable microsite to access the report: https://www.ren21.net/reports/global-status-report/
https://solarthermalworld.org/wp-content/uploads/2020/07/table_r18_gsr_global_additions_in_2019.pdf