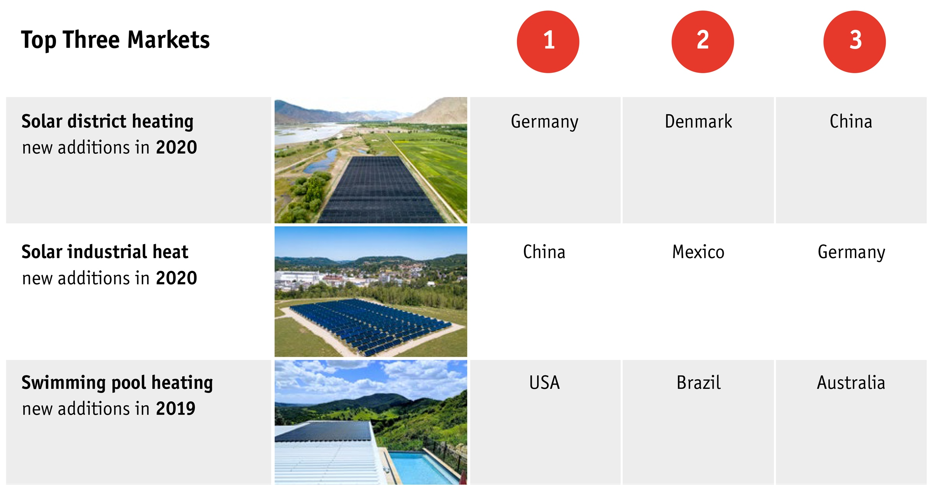 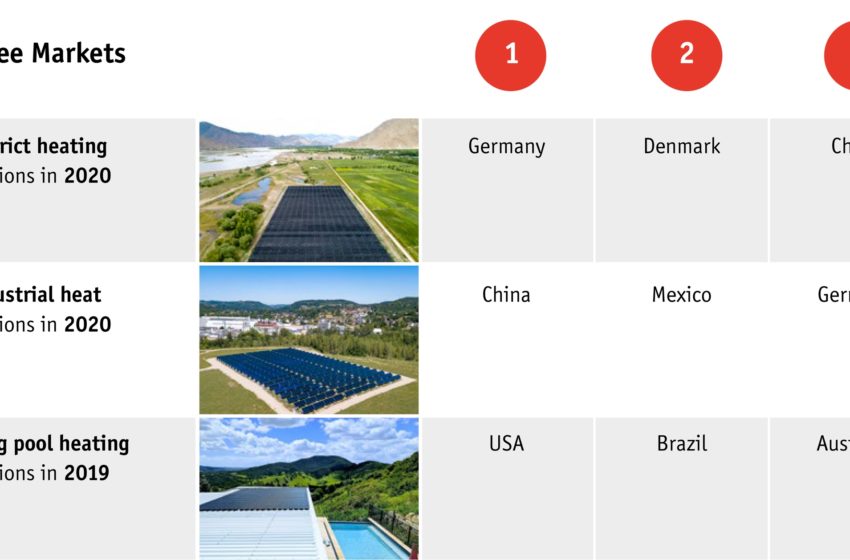 In 2020, Germany was the world’s leading solar district heating market, while China saw the largest increase in the number of industrial solar heat systems added in a single country, according to Solar Heat Worldwide 2021. This year’s edition, presented last week during a Solar Academy webinar that drew more than 350 people, is the first to highlight the top three countries for a variety of application areas. Published annually by the IEA Solar Heating and Cooling Programme, the report has become a well-trusted source of solar thermal data and a go-to reference for international organisations such as REN21 and IRENA. Using information from 68 countries, it delivers a profound analysis of national markets while also drawing on each year’s aggregated figures to indicate global trends. In addition, it contains multiple important chapters on the successes of solar heat use by different customer groups. This news article will cover some aspects of the report from all three perspectives – national, global and sectoral. For more key takeaways, click here and download the entire document. Read a news about the PVT chapter of Solar Heat Worldwide.
Sales up in spite of COVID-19
Despite the pandemic taking a heavy toll on most national economies in 2020, some large solar heat markets continued to grow thanks to increased policy support. Examples are Germany (+26 %), the Netherlands (+6.5 %), Turkey (+2.2 %) and Brazil (+7.3 %). The latter two countries saw rising demand for solar water heaters as people were forced to spend more time at home, prompting them to make improvements around the house.

Trending upwards: 2020 increase in sales in major solar thermal markets
Source: Solar Heat Worldwide 2021
Emerging markets prosper
A few years ago, Werner Weiss, who heads Austrian research institute AEE INTEC and has been co-author of the report since its inception in 2005, worked together with his research team to create a comprehensive data request form, which is sent annually to a growing number of organisations around the globe. The form is used to gather information on the amount of solar thermal collector area added in each country in a year, broken down by collector type and application. Comparing the solar thermal collector area added in 2019 – a figure that can be gleaned from this year’s report – to the area shown in the same table in last year’s publication can help identify the fastest-growing emerging markets in the world.

Global market shifts from residential to commercial
Globally, the solar thermal market witnessed a shift away from thermosiphon to pumped systems. In the five years from 2014 to 2019, the share of thermosiphon systems in annual collector area additions fell from 90 % to 35 %. The hefty fall is the result of a massive increase in so-called engineered projects in China. The phrase refers to larger systems that supply heat to residential, public and commercial buildings , for example. This sub-sector accounted for 74 % of the solar thermal capacity newly installed in China last year. In some regions outside Europe, thermosiphon systems have also come under heavy pressure from PV2heat units, which use a photovoltaic generator to heat water for households via an electric element. By the end of 2020, 11,700 such systems were e.g. installed in South Africa.

The highest growth rates in the solar thermal sector can be found in the market for big domestic hot water systems, used to heat multi-family houses, hotels and public buildings. The systems accounted for more than 50 % of all capacity additions in 2019, up from 28 % in 2014. Much of the growth stems from sales in China. Source: Solar Heat Worldwide 2014 and 2019
Number of multi-MW systems on the rise
This year’s Solar Heat Worldwide report is the first for which its authors have divided the systems in the large-scale project database (contains all installations with a collector capacity above 350 kWth) into two groups. One of those groups contains 262 district heating plants, the other 200 central water heating systems installed in residential, public and commercial buildings. Whereas Denmark dominates the district heat market, China ranks first when it comes to central water heating (see the following table). Outside Europe and China, large solar fields have reportedly been installed in hospitals, hotels or sport centres in Brazil, Cambodia, India, Mexico, Jordan, Kuwait, Thailand and the UAE.
Global number of large solar thermal systems (>350 kWth capacity), by category
Source: Solar Heat Worldwide 2021

Globally, 74 industrial solar heat plants (SHIP) were commissioned in 2020, with China, Mexico and Germany seeing the highest number of additions. By year’s end, at least 891 SHIP installations with a total capacity of 791 MWth were supplying process heat to factories around the world.
Photo: NewHeat
More information:
https://www.iea-shc.org/solar-heat-worldwide
https://www.iea-shc.org/