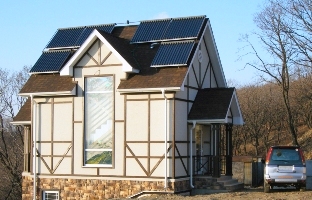 “Made in Germany” is a brand in Russia: These vacuum tube collectors from Sonnenkraft were shipped around half the globe to be installed on a single-family building in the far east region of Primorsky Krai, near the border to China Photo: Rusolar

The solar water heating systems installed in Vladivostok have travelled quite a lot. The vacuum tube collectors and the solar thermal water heaters went by ship from Hamburg around the globe, to finally land on the very far east shores of Russia. “It is cheaper to ship the solar components through the Mediterranean Sea and the Suez Canal rather than to transport them by train through Russia,” explains Sergey Sirko.

The founder of the system integrator Rusolar Energy shipped around 120 m2 of collector area last year. His clients? “Families with a high and stable income that helps them to purchase systems, which are still expensive for most buyers,” explains Sirko. He confirms: “Made in Germany is a brand.” He partners with Sonnenkraft and purchases all the solar thermal components from the German system supplier. Sirko, who started his solar thermal business five years ago, says: “Solar thermal is far away from being a mainstream application for the middle class”. The engineer offers all-in-one solutions of heating technologies, including floor heating and electrical heating elements in tanks. “I set up my systems in a way that my clients can get through the winter with only a simple electrical backup,” Sirko explains his philosophy. His next step is to build an energy-efficient house – in the likes of a European passive house.

The region of Primorsky Krai, bordered by China, North Korea and the Sea of Japan – receives much sunlight but weather conditions vary strongly from area to area. The coastal strip shows temperatures resembling the mild climate of Southern Europe. Once away from the coast, cold winters with below 20 °C may await you. Because of the extreme differences in temperature, Sirko relies only on vacuum tube technology, not on flat plate collectors. The founder of Rusolar Energy hopes to move into his first passive house at the end of the year. The solar thermal pioneer is still busy purchasing special building materials, such as wood and windows from European suppliers.