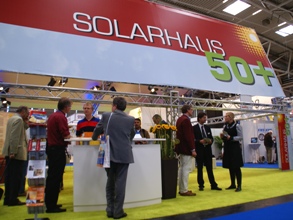 There was no going around the huge Solarhaus 50+ sign in the centre of Hall B2 at the Intersolar, the international solar fair in Munich at the end of May. Solar Energy covers more than 50% of the heating demand of such a Solarhaus 50+. Photo: Bärbel Epp


A wide range of institutions worked together to present the large booth at the Intersolar: The Intersolar organizers Solar Promotion, as well as the German research institutions Fraunhofer Institute for Solar Energy Systems ISE and Institute of Thermodynamics and Thermal Engineering (ITW) at the University of Stuttgart and the association Sonnenhaus-Institut e. V.

“The Solarhaus 50+ has a very high level of building efficiency, meaning the primary energy demand for domestic hot water, heating and electricity is, overall, not higher than 15 kWh/m2 of living space,” Peter Rubeck, managing director of the Sonnenhaus-Institute, explains. The buildings’ heat comes entirely from renewable energies. “We recommend a combined system of wood boiler and solar thermal heating system,” Rubeck says. Heat pumps are no issue at all. “Their electricity consumption would raise the electricity demand in general. This is therefore not a viable option,” Rubeck points out.

“Sonnenhaus” of the German construction company Helma: a typical house for a single family with a renewable heating system, which is not at all standard yet. 7,000 litre tank, 45 m2 solar collectors, 11 m2 photovoltaic installation and a wood gasification boiler. Photo: Helma

And he adds: “We observe a high interest in solar-heated houses.” His just five-year old association has already 170 members. Among them are collector manufacturers, such as the German company Solvis, which plans to offer a renewable heating technology set, consisting of a wood boiler and a 40 to 50 m2 collector system. And the association also includes construction companies, such as the German Helma Eigenheimbau AG, which started just one year ago and has already sold 40 solar houses.