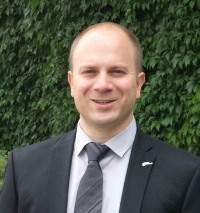 According to Dr Uli Jakob, Vice President of the “Green Chiller – Association for Sorption Cooling”, the solar cooling sector may soon experience a shift from small series production of a niche market to considerable manufacturing quantities. Jakob points out two signs supporting such a development: First, the approval of the IEA-SHC task 48, “Quality Assurance and Support Measures for Solar Cooling“; second, the recent market entry of big players, such as Stiebel Eltron (Germany) and Hitachi (Japan).
Photo: Bärbel Epp

The first meeting of the IEA task 48, which was approved this June, will take place in October at the ESTEC 2011 conference in Marseilles, France. The task is expected to last for three and a half years. It will continue the work taken on by former solar cooling tasks 25 and 38. Whereas the earlier tasks focused on research (Task 25) and demonstration projects (Task 38), the main goal of the new one will be to commercialise solar cooling. Its four sub tasks include:

The person to manage the new task is Dr Daniel Mugnier of French company Tecsol. Uli Jakob will be responsible for subtask D.

Solarthermalworld: Mr Jakob, several companies that were involved in the solar cooling business as system integrators have now stopped their activities and focused on their core business instead. How does that fit into the picture of solar cooling becoming a wide-spread technology?
Jakob: Indeed, some solar thermal companies – such as German collector manufacturer Citrin Solar, or Austrian solar thermal system suppliers Solution and Gasokol – have abandoned their solar cooling business. In fact, only a few companies from the early years of solar cooling are still in the game, for example, Solarnext from Germany and S.O.L.I.D. from Austria – exactly those which made solar cooling a key part of their company strategy.
However, when you look at Stiebel Eltron, on the other hand: The German company has just entered the market, and has tried vigorously to promote their solar cooling activities at the Intersolar fair. And, Hitachi from Japan – a producer of cooling devices – has just set up a solar cooling division earlier this year. The company aims for a sales volume of EUR 44 million until fiscal year 2015, according to its own press release. They are really trying to push the technology.

Solarthermalworld: Despite the difficult situation the entire solar thermal sector has been experiencing for several years now, can you report some positive signs in the development of solar cooling?
Jakob: Yes, there are positive signs to report. After the accident in Fukushima, the awareness for alternative energies has risen dramatically, and solar cooling has become an alternative to cooling by electric energy – in light of the possibility that the electric energy may come from nuclear power.

Solarthermalworld: You have just mentioned electric cooling: As PV costs are decreasing so rapidly, is this technology not likely to become a competition for solar thermal cooling?
Jakob: Having in mind very small installations of up to 2 kW cooling power, it is definitely cheaper at the moment to use PV for cooling. But then again, there is no real competition, because the smallest devices for solar thermal cooling start at 8 kW of cooling power. At present, I do not see how PV would compete with solar cooling for medium and big installations.

Solarthermalworld: What about future cost developments?
Jakob: We have to distinguish here between the different sizes: When it comes to small cooling machines of around 8 to 30 kW, there is a big potential for reducing costs. At the moment, these machines are produced in small series of about 50 to 100 devices per year. In comparison: Heat pumps are produced in series of around 100,000 per year at one single company. The large cooling devices above 100 kW and more have already been produced on a large scale, which means that there is not much potential left in producing even larger quantities to cut down prices. For big solar cooling installations, cost reductions mainly depend on the price of the solar collector.

Solarthermalworld: Where do you see solar cooling in the future?
Jakob: It will not be of significance in Europe. This has already been evident with the new IEA task, in which an institution from Australia is leading one of the sub tasks. North America, Brazil, India, China, Singapore, South Africa and the Middle East will play the important role in the future.
Overall development depends on energy costs, the awareness of solar cooling and, of course, on incentive schemes. It is essential that we manage to get solar cooling out of its niche over the next one or two years. This would require something like the 1,000-roof programme that Germany had in the 1990s for PV.