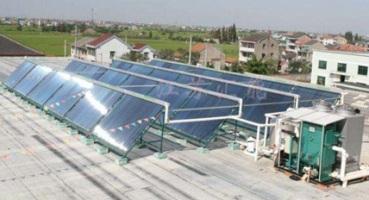 Solar cooling costs dropped by 20 % between 2009 and 2011, according to Jakob´s presentation at the Intersolar conference. The vice chairman of the Green Chiller association leads the communication efforts of the IEA SHC Task 48, “Quality Assurance and Support Measures for Solar Cooling”. Its aim is to help establish a market for solar cooling.

One important reason for the decreasing costs is the standardised system design that has become available in the meantime. It can be found, for example, in the chillii Cooling Kit by German solar cooling system supplier Solarnext. Established European solar system providers have also begun to offer solar cooling kits as part of their product range. Examples are the LB15 System Package by Schüco (Germany), the Solartik by Kloben (Italy), the Kingspan Climate system by Kingspan (Ireland), coolysun by Gasokol (Austria) or the Alaska Set by Solution (Austria).

Sorption chiller manufacturers such as Sortech (Germany) provide additional sub-systems, for example, pre-designed pump groups and recoolers, which help to further integrate solar thermal. Under the brand name chillii, Solarnext has recently offered its first in-house system controller. It is Modbus compatible and has an in-built alarm in case of system malfunctions.

At the same time, new companies have entered the market, many of them from Asia and here especially, from Japan. For example, Sakura Air Conditioner has added a solar cooling system to its product range. The big Japanese company Hitachi has offered a solar cooling kit since 2011 and is aiming at a turnover of EUR 44 million from solar cooling by 2015. The systems of both companies are based on parabolic trough collectors. In contrast, Mitsubishi announced in March 2012 that it planned to sell about EUR 30 million worth of its new compact adsorption chiller series with 10 kW cooling capacity by 2015. The interest the companies have developed in solar cooling will benefit the objectives of the IEA SHC Task 48, as Jakob points out. “The announcements of major industrial corporations give new momentum to an already dynamic solar cooling market,” he says.

Not only businesses from Japan are interested in the cooling technology, but also companies from the world’s strongest solar thermal nation: China. With the country having recently joined the IEA, several Chinese companies have indicated a strong interest in participating in the project, according to Jakob. Among them are Vicot Air Conditioning (solar cooling system supplier and absorption chiller manufacturer), Shuangliang (absorption chiller manufacturer) and Himin Solar (solar collector manufacturer). Chinese company Jiangsu Huineng New Energy Technology (Huin) started supplying small-scale solar cooling kits in 2012 and writes on their website that solar cooling is their core business. The Shanghai Jiao Tong University (SJTU), a renowned solar cooling institute, has been recently approved by China’s government to officially join the Task 48 group.

Important market players in other countries, such as Thermax from India, have also expressed their interest in Task 48. Thermax started selling solar cooling systems in 2010 and uses a sorption chiller supplied by Scheffler dishes.

So far, the higher investment costs compared to compression chillers have held back solar cooling just as it has solar thermal in general. Typical payback times are still 12 to 18 years for the residential sector and 7 to 16 years for the commercial sector. Especially in the Middle East region with its perfect sunshine conditions and high cooling demand, the still low energy costs make it difficult for solar cooling to establish a market, as Shane Caher from Kingspan pointed out during the same solar cooling session mentioned above.