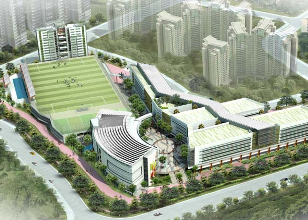 The solar thermal cooling plant at the United World College (UWC) in Singapore has now entered the commissioning phase. The system’s collector surface covers an area of 3,900 m² and powers a 1,500 kW cooling unit, which is based on a single-effect lithium bromide absorption chiller. The United World Colleges are international schools with an emphasis on social and environmental issues. With 2,900 pupils, Singapore’s UWC is the largest of the 13 colleges spread around the world.
Photo: S.O.L.I.D.

The solar cooling plant at the new UWC campus has been built by Austrian company S.O.L.I.D., and will be owned and operated by its Singapore subsidiary SOLID Asia Energy Services. The subsidiary will operate as an Energy Service Company (ESCo), which means that it does not sell the solar plant to the customer, but only the cooling and heating energy it produces.

The collectors themselves are large-scale flat plate collectors, type Gluatmugl HT, which have been produced by Austrian manufacturer oekoTech. They are run at a temperature of around 100 °C to guarantee the cooling unit has a nominal working temperature of 88 °C. A transparent Teflon sheet between absorber and glazing reduces heat losses at high temperatures.

To finance the currently world largest cooling installation, S.O.L.I.D. has teamed up with the Österreichische Kontrollbank and the Östereichische Raiffeisenbank, almost turning the project into an exclusively Austrian effort despite its Singapore location (see http://www.solarthermalworld.org/node/1387).

In any case, remembering the name S.O.L.I.D. may prove more important than marvelling at its latest feat of engineering, as the Austrians are already on the way to outperforming themselves. In Phoenix, Arizona, the company has just started the construction of a 1,750 kW solar cooling installation, powered by 5,000 m² of flat plate collectors. As does the plant in Singapore, the Phoenix installation will include a single-effect lithium bromide absorption chiller. Commissioning the plant is scheduled for the end of this year. And as in Singapore, it will cool the classrooms of a school, this time the Desert Mountain High School.

The plant is going to be constructed by S.O.L.I.D’s daughter company SOLID USA, also located in Phoenix. S.O.L.I.D needs a a local partner with a tax account in the US (a so-called tax equity partner), because incentives are granted only in the form of tax rebates. The planned project could receive both state and federal incentives. Like the subsidiary which built the UWC plant, SOLID USA will operate as an ESCo.