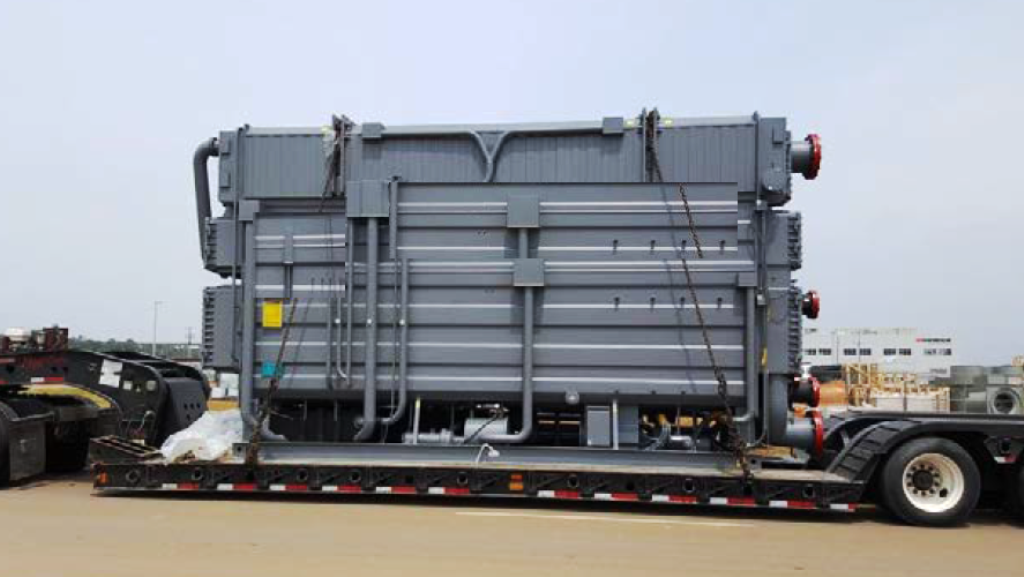 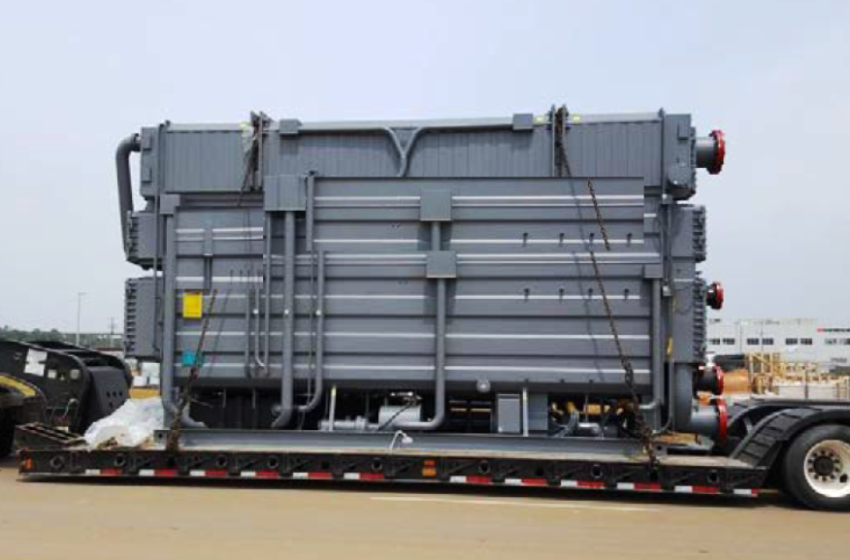 China-based Broad Group has developed a triple-effect absorption chiller that can produce chilled water down to 5 °C, while requiring a lower inlet temperature of about 75 °C leading to a return flow temperature of 55 °C. The new chiller generation has been on the market since 2016 and was used in a few initial installations in China and the USA (see photo). The chiller has been optimised to operate based on a variety of heat sources, such as solar fields, groundwater, district heating networks and industrial facilities. The custom-designed unit has been offered with a cooling capacity of 116 kW to 6,000 kW. Broad, which was founded in 1988, employs about 3,000 staff and sells products in more than 80 countries.
Photo: Broad Group
To reduce the inlet temperature from a single-effect unit with around 98/88 °C to 75/55 °C, additional components are necessary, so that this new triple-effect device is around 20 % larger than the single-effect one at the same cooling capacity. It includes an additional absorber, as well as two auxiliary heat exchangers and three generators. The additional heat transfer loop in the absorption chiller is the reason for reduced efficiency. Broad rates the triple-effect chiller at a COPth of 0.6, while the single-effect unit achieves 0.7 to 0.8. The supplier has emphasised that the new model does not require any changes in how the chiller is installed.
Few solar cooling references so far
A look at Broad’s long and diverse list of references, which includes airports, factories, hospitals and shopping centres, will reveal that solar-driven air-conditioning systems are still few and far between. Last year, the company said that no Broad unit, neither a single-effect nor a triple-effect device, had been part of a solar thermal cooling installation, even though the 13th Five-Year Plan (2016 to 2020) set a 2020 target of 2 % (about 110 million m² of air-conditioned floor space) for solar thermal cooling in buildings.
Solarthermalworld.org has already reported about solar thermal cooling references which use single-effect Broad chillers:
Since 7 February 2018, Ikea Singapore has been using an 880 kW absorption chiller unit to cool two sales areas in its main building. The United World College, a school based in Singapore, has been supplied by a single-effect lithium-bromide absorption chiller since August 2011. This type of absorption chiller was also installed at Arizona Desert Mountain High School in mid-2014. The two installations mentioned last have been operated by S.O.L.I.D., an Austrian supplier of turnkey solar systems, as energy service companies.

Tianjin Zhongbei Industrial Park, dominated by automotive manufacturers, is one of Broad’s solar air-conditioning showcases.
Photo: Broad Group
One solar air-conditioning project in China using a double-effect Broad chiller is in the industrial area Tianjin Zhongbei (see photo), where Broad designed a vacuum tube collector array sitting atop office and showroom buildings to run an absorption chiller with a cooling capacity of 698 kW in summer. Heat collected from sunlight at about 98 °C is transferred to the chiller (98 / 88 °C) to produce cold water at 7 °C. This water is then used to air-condition buildings (7 / 12 °C). A 5 m³ storage tank is part of the solar loop and makes it possible to continue air conditioning even after sunset.
The distinctive feature of this installation, which was commissioned in November 2015, is the use of the absorption chiller as a heat pump in winter, for which thermal energy coming from the solar loop is transferred directly to the evaporator, floating through the absorber and condenser to be heated before being supplied to consumers in the form of hot water and space heating. In both modes of operation, the backup source of energy is a natural gas boiler. The advantages of combining a chiller and a heat pump are that the solar system clocks in more operation hours and allows for the use of low-temperature heat provided by the collectors.
Organisations mentioned in this article:
http://en.broad.com
https://www.solid.at/en