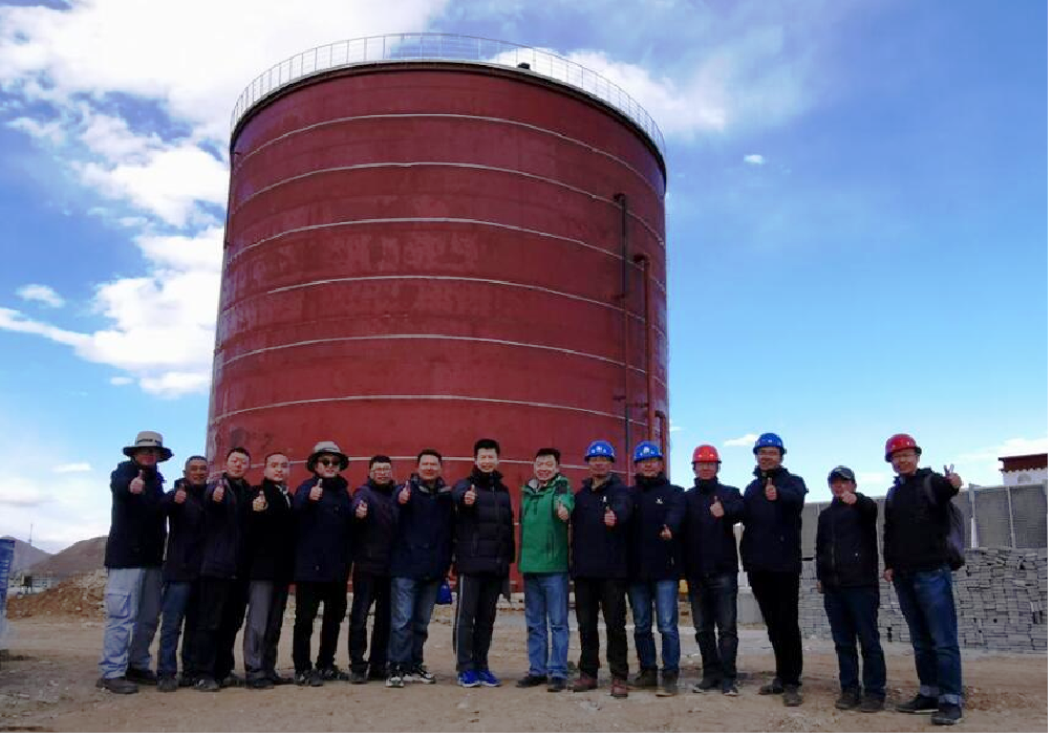 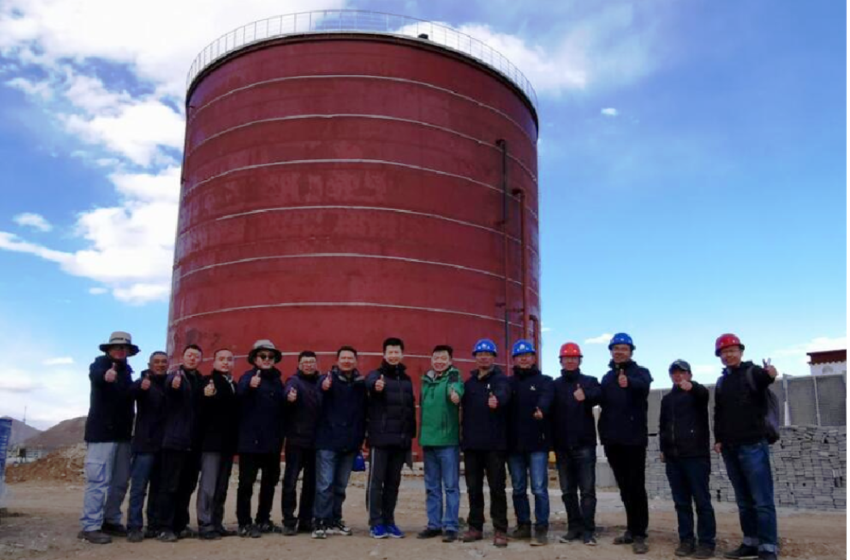 In the middle of November, Chinese-Danish joint venture Solareast Arcon-Sunmark Large-Scale Solar Systems Integration started up its second solar district heating system in Tibet. Now, its 35,000 m² solar field is supplying the thermal energy needed for heating rooms in thousands of households across Zhongba County. In the photo, taken during an inspection visit in early October, the team who worked on the project can be seen standing in front of the storage tank that is part of the new installation. The first SDH plant put up by the joint venture was completed last year and came online in December 2018.
Photos: Solareast Arcon-Sunmark
The company’s second system is 4,700 metres above sea level and was put up in Zhongba, near the border between China and Nepal, where winter temperatures reach minus 30 °C and the heating season lasts around 250 days. The investment in the solar installation including the new district heating network added up to around Renminbi (RMB) 173 million, or EUR 22.3 million. All of the money came from China’s central government.
Key data on two SDH systems installed in Tibet
Source: Solareast Arcon-Sunmark
Management staff from the joint-venture partners toured both SDH sites at the beginning of October (see the photo below). The Danish side of the venture was represented at the event by Arcon-Sunmark’s Managing Director Thomas Karst and Torben Sørensen, Group Executive Officer at parent company VKR Holding. Karst became head of Danish-based Arcon Sunmark, a supplier of solar thermal turnkey systems and collectors, after Ole Dalby stepped down last November. Its Chinese venture partner was represented by Xinjian Xu, Founder and Chairman of the Board of Solareast Holding, which trades under the brands Sunrain and Micoe, as well as Solareast Arcon-Sunmark’s Managing Director Aaron Feng Gao.

Pleased with the success of the first SDH project in Langkazi (from right): Aaron Feng Gao, Managing Director of Solareast Arcon-Sunmark (China), Torben Sørensen, Group Executive Officer at VKR Holding (Denmark), Thomas Karst, Managing Director of Arcon-Sunmark (Denmark) and Jason Zhang, Technical Coordinator of Solareast Arcon-Sunmark.
Solareast Arcon-Sunmark operates the SDH systems on behalf of their owners, which are the local municipalities. Feng Gao estimates annual operation and maintenance costs to be EUR 515,000 in Langkazi, or 3 % of the initial investment. In Denmark, owners of SDH installations usually expect to pay 1 % for O&M: “We have employed eight operators for the first year, to guarantee safe operation. In Europe, we would need only two employees for the same job at a plant of this size. Moreover, the plant is in a remote location, far away from any bigger city, so labour and transport costs are high.” Still, Feng Gao expects “significantly lower operating expenses in the future, after operators have gained more experience.”
Organisations mentioned in the news article:
Solareast Arcon-Sunmark Large-Scale Solar Systems Integration: http://www.arcon-sunmark.cn
Arcon-Sunmark: http://arcon-sunmark.com/
VKR Holding : https://vkr-holding.com/
Solareast: http://www.solareast.com