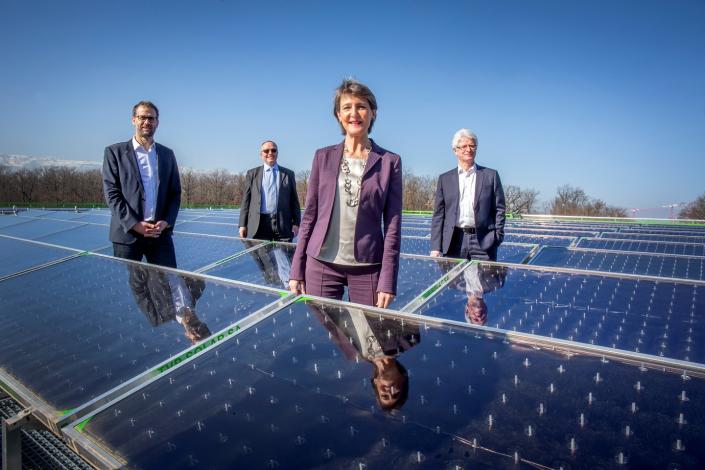 A new solar district heating plant in Geneva, Switzerland, is basking in the limelight of Swiss politics, with environmental minister Simonetta Sommaruga personally attending the start-up of the system at the end of February. The 816 m2 solar field consists of special high-vacuum flat panels supplying heat to Geneva’s district heating network at a temperature of 85 °C, even in winter. The grid is operated by the SIG utility and the solar field was designed and delivered by Geneva-based TVP Solar.
Photo: SIG
The installation helps meet the objectives of Geneva canton’s Energy Master Plan 2020-2030, approved in early December 2020. The plan sets out sector-specific targets, including a 100 GWh solar heat contribution by 2030, up from 20 GWh in 2018. The SDH system was designed to deliver 516 MWh a year, which corresponds to a specific annual yield of 632 kWh/m2. This is significantly higher than the typical Danish SDH plants which produce between 321 kWh/m2 to 500 kWh/m2 per year, the average being 409 kWh/m2, according to one IEA SHC publication.
“Geneva’s roofs are a valuable resource, and climate action is about making the most of every available square metre,” Antonio Hodgers is quoted in a joint press release sent out by SIG and TVP Solar on 25 February. Hodgers, a city council member, is the head of Geneva’s urban planning department.
The plant is one of several innovative clean energy systems SIG has implemented in the last years. The solar field, which was mounted onto a roof at SIG headquarters in Vernier’s Le Lignon district in Geneva canton, is equipped with 80 performance-tracking sensors. The detailed data they yield is transmitted to Vaud canton’s HEIG-VD university for further analysis.
Cost competitive zero-carbon heat
The press release put the demonstration project’s budget at CHF 2 million, of which CHF 800,000 was spent on the solar field. Two-thirds of the field costs were borne by SIG, the remainder by TVP Solar. TVP and SIG also entered into a shared fuel savings agreement, while SIG is the one running the plant. “Including the CAPEX of the solar field, you get to a heat price of about 70 CHF/MWh over 20 years. That’s a very competitive proposition for zero-carbon heat in Switzerland. Across Geneva, clean biofuel energy costs 100 CHF/MWh,” noted Guglielmo Cioni, Vice President of Business Development at TVP Solar. 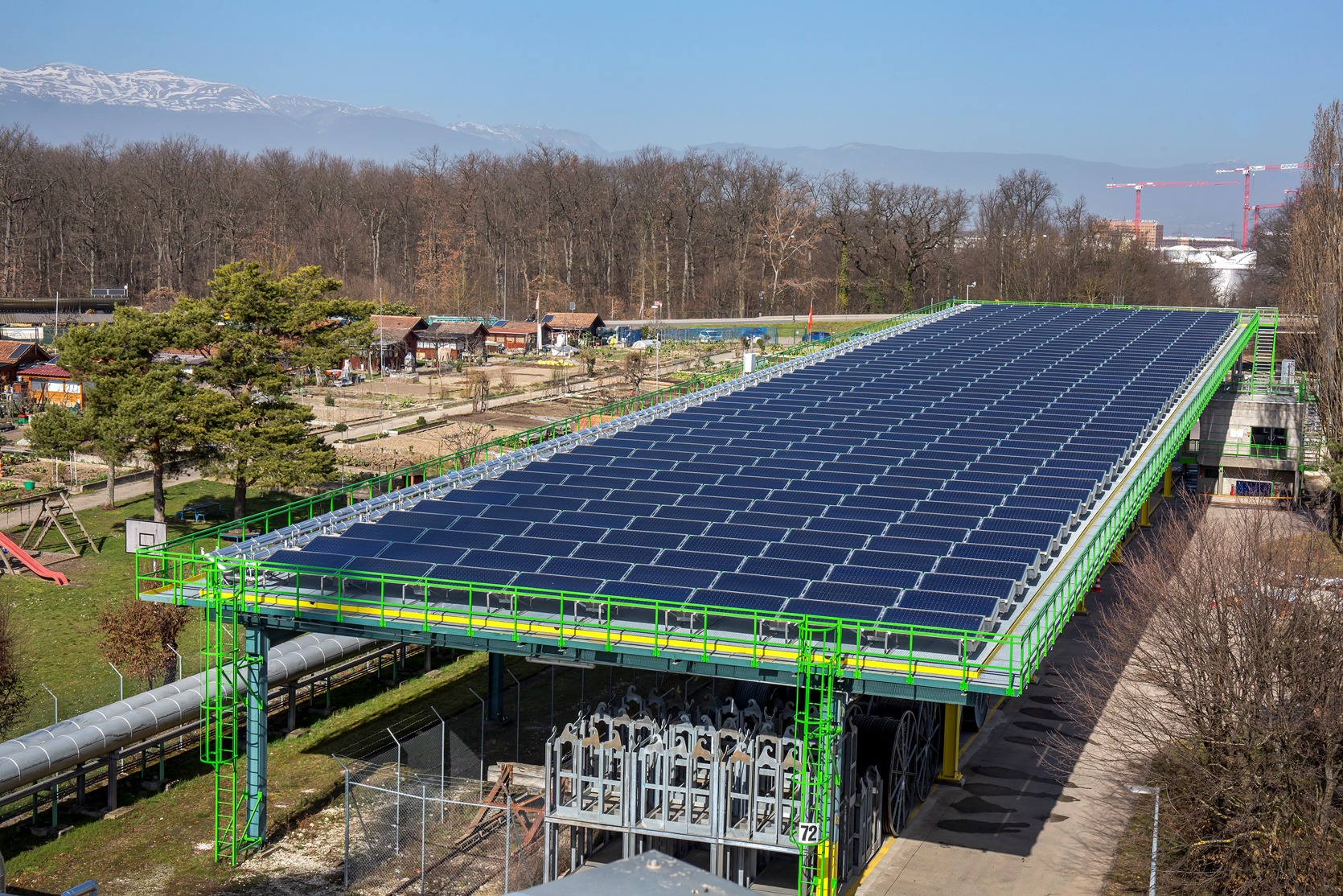 Showcasing innovative technology: TVP said it registered over 180 patents worldwide and built an entirely new manufacturing facility before introducing the high-vacuum flat panels to the market in 2018.
Photo: SIG
The distinctive characteristic of this particular SDH plant is its high output in wintertime. To reduce energy losses, especially during cold winter days, the absorbers are located inside an evacuated casing. “Another advantage of high vacuum insulation is that it takes very little time to ramp up the temperature in the morning. The solar field reaches the required 85 °C in just a few minutes, even if it is partially covered in snow,” Cioni said about his company’s experience of operating the plant during the first weeks after start-up.
TVP’s most important panel-related patent describes a new method for joining glass plates and metal frames to ensure a high enough vacuum inside the collectors. Thanks to the small size of the contact areas between the internal absorber and the metal frame, heat losses are reduced to a minimum, but enough heat is transferred to the casing for the snow to start melting. 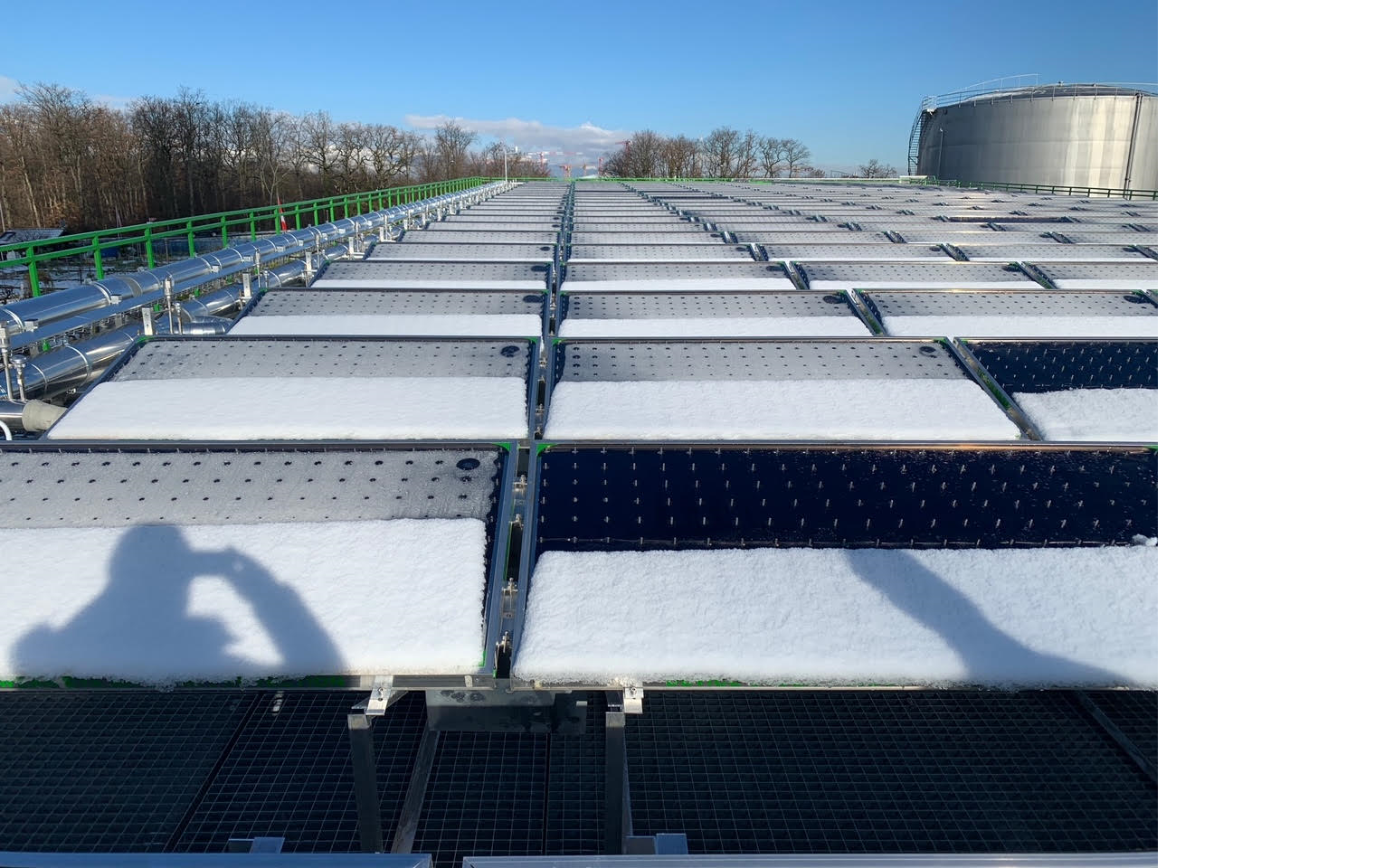