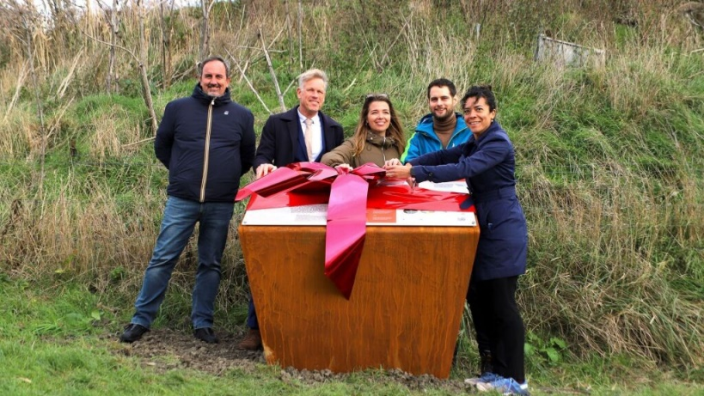 At the beginning of November construction started of a 37 MW solar district heating plant in Groningen, Netherlands. The 48,000 m2 collector field will be connected to the district heating grid of Groningen, which is operated by the utility company Warmtestad. Three companies joined forces to develop this ambitious project: Solarfields, Netherlands, as the project developer, K3, Netherlands, as the investor, and TVP Solar, Switzerland, as the turnkey provider of the solar field. Together they founded a special purpose vehicle (SPV) – an entity which owns and operates the plant. This is a business model established in renewable electricity projects to reduce the risks for financial institutions. The Groningen plant has a number of outstanding features: the collector field will consist of high-vacuum flat plate collectors that produce the required temperatures from 69 to 93 °C all year round. Furthermore, the project SPV has signed a long-term solar heat delivery contract over 30 years with the utility Warmtestad.
Photo: TVP Solar

The solar thermal plant supports the ambition of the municipality of Groningen to be energy neutral by 2035. Once completed, the solar heat will cover 25 % of the total heat demand for private and public buildings in the northwest of Groningen. Commissioning is planned for summer 2023.

The EUR 23 million CAPEX was partly made available by a loan from the Triodos Bank. The project SPV, as the owner of the solar heat plant, will also receive a feed-in tariff from the national subsidy scheme called SDE++. It supports energy produced over 15 years using a wide range of renewable technologies including solar thermal. The feed-in tariff is calculated as the difference between the current gas price and a price cap of 85 EUR/MWh. This difference is updated annually and paid over a period of 15 years.

TVP Solar was chosen, after an extensive tender process, particularly because the company can guarantee higher and more constant heat generation for Warmtestad´s heat network. This is what it says in the project flyer that Solarfields published on the occasion of the official start of construction at the beginning of November. As a turnkey technology provider and O&M operator of the field, TVP Solar provides a performance guarantee of 15 years.

The first SDH commercial plant with TVP Solar collectors in Geneva, Switzerland, has proven that hot water at around 80 °C can be delivered to the heat network throughout the year because of the good insulation of the collectors. In the first 12 months of operation the 0.5 MW plant achieved an energy production of 516 MWh, equivalent to a specific annual yield of 658 kWh/m2.

High yields even at high temperatures because of vacuum insulation

In Groningen, an annual yield of 25 GWh is expected, which equates to a specific yield of 520 kWh/m2a. “The solar plant will achieve a yearly average solar thermal efficiency of 52 % and feeds directly into the network at the required temperatures from 69 to 93 °C even in winter and under subzero conditions”, said Guglielmo Cioni, Vice President Business Development of TVP Solar.

Solarfields was pleased with the reduced land area requirement for the collector field because of the high-performance collectors. In its project flyer it says: “TVP provides a newer and more advanced solar thermal technology than we originally envisaged. This means that fewer hectares are needed to realise the desired capacity.” The collector field including the technical building and the storage tank will occupy 12 hectares and is planned to produce 25 GWh annually. “Traditional flat-plate collectors could only achieve a maximum of 20 GWh per year. It’s therefore 25 % more energy from the same area, a strongly enabling point for the whole project,” emphasised Guglielmo Cioni, Vice President Business Development of TVP Solar.

He also points to the innovative business model used typically for large PV plants. The Groningen plant will be one of the very few solar district heating plants in Europe that are financed via an SPV. According to Cioni this model will offer project developers a new and viable option to build valuable portfolios with renewable heat assets.

The solar field is planned on 12 hectares of land. For minimal sealing of the ground, no concrete foundations are used and the solar panels are mounted a bit higher, so that there is more space for the grass to grow under the collector rows. Photo: TVP Solar

Organisations mentioned in this article