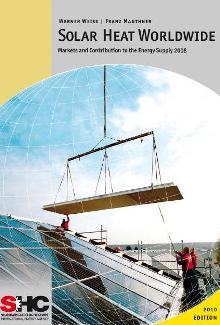 In 2008, the global solar thermal market grew by a significant 35%. The main reasons behind such a strong upward trend were the high growth rates of glazed water collectors in China (+35 %), Europe (+63 %) and North America (+42 %). Graphic: AEE Intec

The above-mentioned results were derived from a just-released study called “Solar Heat Worldwide. Market and Contribution to the Energy Supply 2008”. Published by Austrian service provider AEE Intec, the paper is available for download on the website of the International Energy Agency (see the link below). In the annual report, researchers gather market data from more than 50 countries, including the newly installed capacity of vacuum tube, flat plate and unglazed collectors. This data enables the authors of the study to then calculate the worldwide contribution of solar heating and cooling to energy supply and CO2 reduction. The report is the most comprehensive of the publicly available market studies on the global solar heating and cooling market. Some of its major findings are presented in the following:

# 2008 was record-breaking, with an increase in sales of 35 %. Growth rates had been much lower in the years before: 19 % in 2007 and 22 % in 2006. Unfortunately, there were some difficulties with this year’s market statistics from China. The Chinese partner organization of AEE Intec corrected its figures for 2007 from 21 million m2 to 23 million m2 of newly installed collector area, which influenced the results of this particular year significantly. Whereas last year´s publication estimated an annual growth rate of 9 % for 2007 when it came to the newly installed collector area, the one of this year corrected the value to the above-mentioned 19 %. The authors of the study estimate an increase in the newly installed collector area in 2009 globally of between 14 and 18 %.

# The global solar heating and cooling sector is still leading the ranking for the highest installed capacity (189 GW) of the new renewable energies in operation at the end of 2009, followed by wind (158 GW) and photovoltaic (23 GW). Traditional renewable energies like biomass and hydropower are not considered in this ranking.

Regarding the estimates of produced energy in 2009, solar heat with 137 TWh thermal takes second place to wind, with 340 TWEel, and comes before photovoltaics with 24 TWhel. The 2009 figures for the solar thermal sector are based on extrapolation and some confirmed figures of the market volume in key regions of Europe, China and India.

# The Solar Heat Worldwide study for 2008 again expanded the section on distribution by application (page 33 to 37). Combi systems providing space heating and hot water supply only play a significant role in some European countries, as well as the USA and Japan. Solar thermal installations in multi-family houses have the largest share in Spain (65 %), France (15 %), China (10 %) and Brazil (7 %). Solar systems for industrial process heat are only relevant in India with a 16 % share of the newly installed solar thermal capacity.