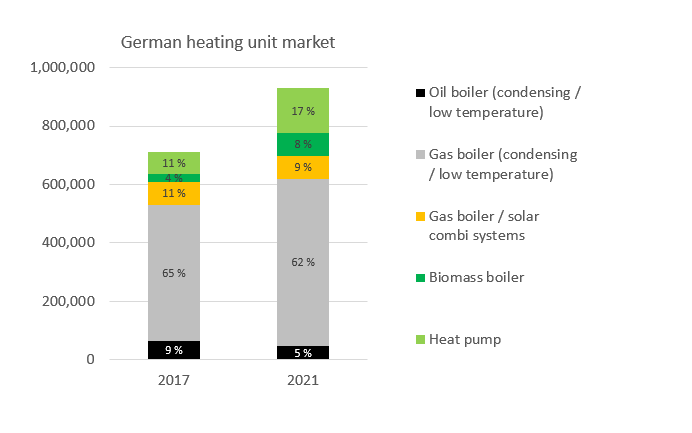 The German boiler manufacturers are satisfied with their sales for 2021. Plumbers installed almost one million units. This is 10 % more than in the previous year, according to statistics from the heating industry association BDH. When looking at the market figures broken down by technology, biomass boilers were the winners. Their sales increased by a significant 41 % in 2021, heat pumps by 28 %. Even the sales of oil boilers were up 2 %, and 5 % more gas boilers were put into operation in 2021 than in 2020.
Chart: BDH market statistics 2017 and 2021

The only 100 % emission-free heating technology, solar thermal systems, was the only technology for which sales remained stable. According to a press release published on 3 February by the solar industry association BSW Solar, a total of 81,000 systems with an area of 640,000 m2 (448 MW) were installed in 2021, about the same volume as the previous year. As a result, the BSW sounded the alarm and published a position paper Solar Thermal 2022 in February, following the call for a Push programme for solar district heating already announced back in November 2021.

The sales of solar thermal systems only grew by 4 % between these two years, increasing from 78,000 to 81,000 systems. In the chart above it is assumed that all new solar thermal systems in 2021 were combined with a gas boiler. The share of these combi systems, marked in yellow on the chart, even declined in this 5-year period from 11 % to 9 %.

To reverse this trend, policy actions are needed. That is why an alliance of different associations brought out the position paper Solar Thermal 2022 in February (see attached document). BSW Solar signed the paper together with, among others, the Sonnenhaus Institute, the DGS and the German section of the International Solar Energy Society. The associations made clear that solar heat is a highly efficient decarbonisation technology. It has the great advantage that its massive deployment does not cause high infrastructure costs such as those for electricity grids or hydrogen infrastructure. Solar thermal can also reduce geopolitical dependencies on imported fossil fuels immediately.

The associations welcome the fact that the German government, according to its coalition agreement, wants to use all suitable roof areas for solar energy in the future. However, they point out that the political regulations are intended to enable an equal footing between PV and solar heating on all roofs.

In addition, privileges for solar thermal energy in the German building regulations § 35 are required. According to the association, municipalities find it difficult to provide areas for solar fields. Cancellations and years of delays in project development have been the rule so far.