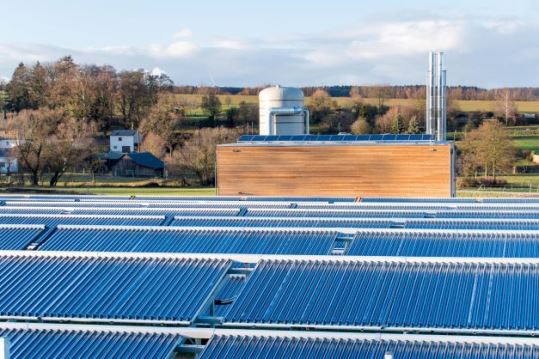 The German Ministry of Economics is making EUR 3 billion available until 2026 for decarbonising the district heating sector. Municipalities, energy suppliers and energy communities can apply for funding from 15 September. The BEW programme, short for Federal funding for efficient heating networks will finance the new construction of heating networks that have at least 75 % heat feed-in from renewable energies or waste heat as well as the expansion, densification and decarbonisation of existing heating networks. The start of the programme was delayed by more than a year. This is how long it took the EU Commission to approve the state aid. The critical point was the operating cost subsidy for solar thermal and heat pumps, which is to be granted over ten years.
Photo: Guido Broer

The BEW programme subsidises a maximum of 40 % of investments in generation plants, heating grids, heat storage facilities and optimisation measures for grid operation. The construction of new district heating grids is subsidised if at least 75 % of the heat fed into the grid comes from renewable energies or waste heat. As defined by the funding guideline, qualifying renewable energies are solar heat, PVT collectors, large heat pumps (air or brine), deep geothermal and biomass. The implementation period from the date of notification of the grant is 48 months and can be extended once by up to 24 months upon request. The maximum funding amount is EUR 100 million per application.

The BEW replaces the predecessor programme Wärmenetze 4.0 (District Heating Networks 4.0), which has provided financial support for the construction and renovation of heat networks since July 2017.
The required level of renewables or waste heat in subsidised networks has increased. District Heating Networks 4.0 required a share of at least 50 %, of which a maximum of half could be biomass. This share has increased to 75 % in the BEW. The biomass share in grids of 20 to 50 km is limited to 25 % of the annual heat produced in the grid, and 15 % for larger grids.

Another novelty is the operating cost subsidy, which had to be approved by the EU Commission as state aid, and thus led to the delay of more than a year until the BEW could start. In the original draft by the previous German government of July 2021, solar thermal systems that feed into heating grids were to receive 2 EUR-ct/kWh for the first ten years of operation.

This support has now deteriorated considerably due to the protracted review by the EU Commission. According to the subsidy guidelines now published, only 1 EUR-ct/kWh will be granted for the first ten years of operation. In addition, the applicant must submit a calculation proving that the operating cost subsidy is necessary for the economic viability of the project. Given the great uncertainty about future gas prices in Germany, this is no easy matter. This is probably also the opinion of the Federal Office for Economic Affairs and Export Control (BAFA), which is responsible for administering BEW.

Solar thermal energy is supported as an individual measure

A third important aspect of the new BEW subsidy is the possibility to apply for subsidies for individual systems in Module 3. For heating networks that supply more than 16 buildings or more than 100 residential units, the 40 % subsidy can also be used for individual measures such as solar thermal systems, heat pumps, biomass boilers or heat storage tanks. But here too, the BEW is replacing an existing subsidy for large collector fields that ran through the German KfW Bank. This KfW programme will now expire at the end of the year.

Solar Heat in Germany is the title of a brochure that the German solar industry association BSW Solar published recently to promote carbon-free heat from the sun for heat utilities or energy communities (see pdf for download below). Source: BSW Solar

Solar heat should be privileged in the Building Regulations §35

The German solar association BSW Solar welcomes the launch of the BEW as a “starting signal for the solarisation of the German district heating sector”. The association expects high demand, as solar thermal energy could already generate heat for less than 5 ct/kWh without subsidies and cover about 10 % of the space heating demand in 10 years. However, the last few years of District Heating Networks 4.0 funding have shown that, despite continued good funding, an accelerated expansion of solar thermal energy will only be possible if the search for suitable sites is simplified by granting privileges in accordance with §35 of the German Building Code. This is a demand that the German solar thermal industry has been making for a long time.