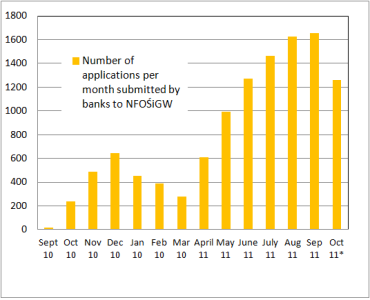 By 15 October 2011, a total of 11,386 applications have been submitted by banks within the residential subsidy programme of the Polish National Fund for Environmental Protection and Water Management (NFOŚiGW). The monthly application rate has increased tremendously – from 15 applications in the starting month September 2010 to 1,658 in September 2011 almost one year later. The figure from October 2011 in the chart above represents only half the month, which means this year’s total collector area can be expected to climb even steeper.
Source: NFOŚiGW

Looking at the application procedure, it seems almost certain that the largest part of the applications submitted by the banks to NFOŚiGW will be followed by a successful installation of a solar water heating system. To finance the solar thermal installation, the client first needs to sign a loan with one of the banks. After the bank has approved the loan, it submits the grant application to NFOŚiGW.

According to the administrator of the programme, the NFOŚiGW grants for residential installations have helped to install 71,870 m2 of solar thermal collector area in Poland since September 2010. “It is a good result,” Janusz Starościk, President of the association SPIUG, says. The area installed through the programme is as much as half of the total area of 145,906 m2 (102 MWth) newly installed in 2010. In addition, the programme statistic shows how many systems were installed by either single-family home owners or owners of flats in multi-family buildings (see the following table).

Starościk adds that the number of grant applications got higher and higher after some changes were made to the NFOŚiGW grant programme at the beginning of the year, among others, extending grant eligibility to new buildings and solar heating. In fact, the number of applications has grown even more dramatically since April 2011: from approximately 500 a month to over 1,000, reaching a total number of 11,386 in the middle of October.

Despite its success, it is not only NFOŚiGW’s funding that drives market growth: “lt is also a matter of the anticipated increase in fuel prices and very low market penetration,” Starościk explains. According to Russian press agency Interfax, which published gas price information offered by Gazprom to European countries in February 2011, Poland pays 0.336 USD/m3 of Russian gas, whereas Germany is charged only 0.271 USD/m3. Residential consumers pay even more. The Polish gas monopoly PGNiG charges household owners approximately 0.625 USD/m3 (20 PLN/m3). And, Polish daily newspaper Rzeczpospolit a found out that coal prices in retail markets have also grown significantly over the last few years, reaching 700 PLN/ton in September 2011 (USD 219), whereas they stood at 13 USD/ton in the early 90s. Now, the still increasing fossil fuel prices have made solar thermal collectors a more profitable alternative than ever before.

Share of vacuum tube collectors in newly installed collector area in Poland over the last years, according to the annual market statistics of the Institute for Renewable Energy EC BREC IEO.

According to a presentation of Grzegorz Wiśniewski, President of the Institute for Renewable Energy (IEO) in Poland, at the European Solar Thermal Energy Conference (ESTEC) in Marseilles, the share of vacuum tubes, on the other hand, has been declining since 2008 (see figure above). “This may be the result of the higher cost for a solar system with vacuum tube collectors compared to a flat plate collector system, and the decreasing interest of customers in vacuum collectors made in China,” Wiśniewski analyses in his conference paper. Watt, the biggest manufacturer of vacuum tube collectors in Poland, confirms the trend. “The demand for vacuum tubes is stagnating, whereas our flat plate collector output is constantly on the rise,” Watt’s Managing Director Marek Szymanski explains.

When asked, the programme administrator of NFOŚiGW confirmed that the figure for combi systems providing heat for hot water and space heating will be available at the earliest in January 2012. “The banks which grant the loans and pay out the rebates send us detailed information once a year in a binding financing package,” explains Pawel Bartoszewski, who is responsible for the funding programme at NFOŚiGW.

This news was written by Marcin Czekanski, a Polish journalist specialised in renewable energies and based in Szczecin, Poland. mczekanski@econaviga.eu.