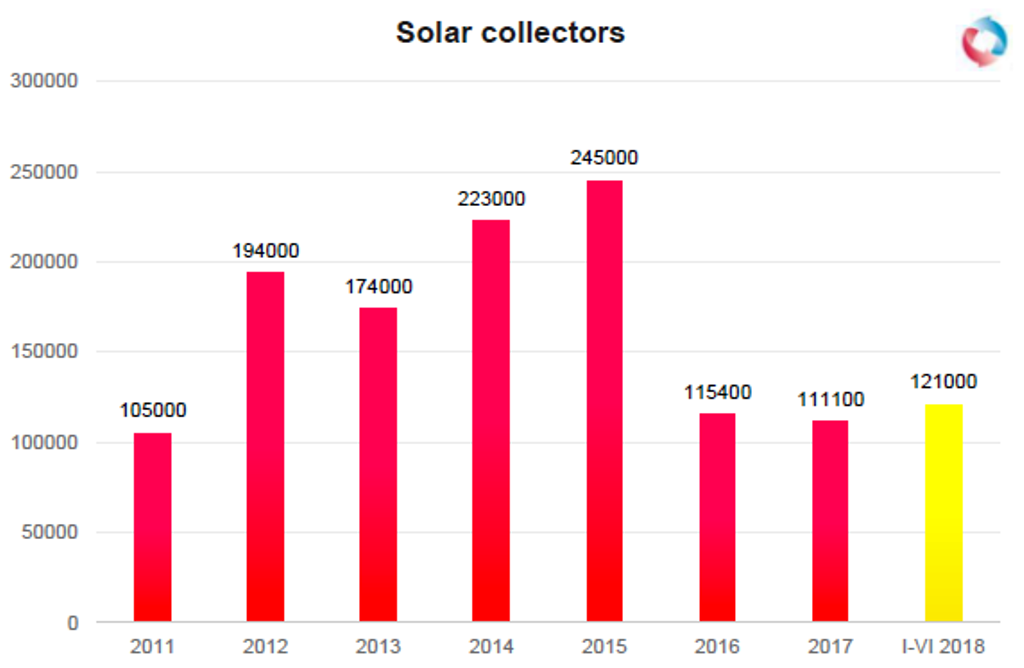 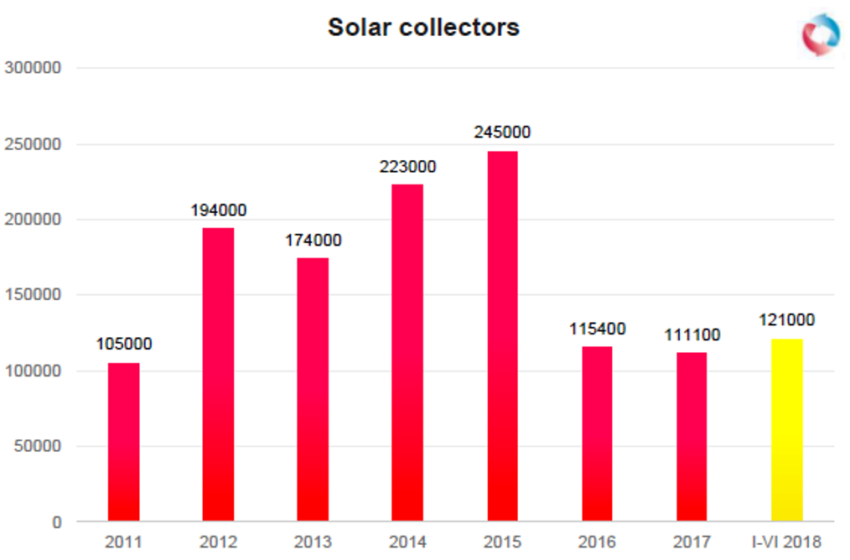 After two years of declining collector sales, the market in Poland picked up again in the first half of 2018. The chart shows the amount of collector area added each year, based on regular surveys run by SPIUG, the Association of Manufacturers and Importers of Heating Appliances. The yellow bar in the chart represents the first six months of 2018, when collector sales jumped by more than 50 %. The illustration is part of a report published by SPIUG in September. In the document, the authors describe the growth of every heating technology sold in Poland. The data for it came from a survey among the association’s members. SPIUG stated that the reason for the strong upturn in 2018 had been the award of contracts from public tendering in the previous year.
Source: SPIUG
The report’s authors write that the number of residential solar water heaters will need to grow, since they are important to the success of the Polish solar thermal market. According to SPIUG, 74 % of all collectors sold in 2017 were used for small solar hot water systems, another 10 % for combi units and as little as 14 % for larger installations, for example, to provide heat for hospitals, public buildings or pilot projects on solar district heating.
The big drop in sales in 2016 followed the end of the national support scheme that summer. The programme had been run by NFOŚiGW, the National Fund for Environmental Protection and Water Management, and had supported residential solar water heaters since September 2010, pushing demand the following years.
As there no longer is a reliable retail market for single-family systems, it remains unclear whether the increase in the first half of 2018 continued into the second. The reason given for the jump in sales in the English-language version of the report was that there had been several projects put out to tender in 2017.
Nevertheless, opportunities still exist in this publicly funded part of the market. Anti-smog campaigns and the emission reduction programme PONE are but a few examples. The latter helps municipalities promote efficient boilers and supports renewable energies such as solar and biomass. The authors of the report write that, unfortunately, emotions run high when tendering out work, which means that there are few, if any, joint efforts by technology suppliers to breathe new life into the market.
Heat pump and condensing boiler sales peak in 2017
Even though SPIUG publishes a market report on heating systems each year, the document has never been 45 pages long. “We have yet to see reliable figures on the number of heating systems in Poland, so we decided we would collect the data ourselves. But the competitive mentality of suppliers makes this a difficult task,” said Janusz Starościk, President of SPIUG.
The report also includes a chapter on other heating technologies, such as gas and solid fuel boilers, as well as heat pumps, which have been sold with varying degrees of success (see table). Whereas sales of heat pumps and gas-fired, wall-hung condensing boilers peaked in 2017, those of solid fuel boilers and solar water heaters remained at their previous levels. In contrast, fewer heat pumps were sold in the first half of 2018 than in the previous year, while wall-hung condensing boilers were again in high demand, although only solar thermal collectors were sold at a faster pace.
Market for heating appliances in Poland
Source: SPIUG
The original Polish study as well as the English translation have been attached to this news piece.
Organisations and programmes mentioned in this article:
SPIUG: http://www.spiug.pl/
PONE: http://www.niskaemisja.pl/program_ograniczenia_niskiej_emisji/
https://solarthermalworld.org/wp-content/uploads/2018/12/rynek-urzadzen_grzewczych_09_2018.pdf
https://solarthermalworld.org/wp-content/uploads/2018/12/heating_appliances_market_poland_august_2018.pdf