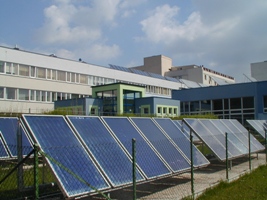 Flat plate collectors are still the dominating technology on the Polish solar thermal market. The share of vacuum tube collectors, however, increased from 17 to 31 % within two years. This is one of the examples of a market survey published in May 2008.  Photo: IEO

The Polish solar thermal market almost doubled in 2008: Flat plate collectors accounted for 70 % of the 129,600 m2 of newly installed collector area. The largest market for solar thermal technology is in the south of the country, where a great number of manufacturers and distributors are based. The average system cost was 1,500 (Polish Zlotych) PLN/m2 of active collector area for large-scale projects and 3,000 PLN/m2 for small residential units.

The above-mentioned data was the result of a comprehensive market survey, carried out by the Institute for Renewable Energy (IEO), the former EC BREC, in Warsaw. “Until now, nearly 20 leading domestic manufacturers, as well as foreign distributors, which, together, covered more than 80 % of the market in 2008, signed an agreement with us on multiannual cooperation within the scope of maintaining a statistical register,” Grzegorz Wisniewski, President of IEO, explains. The high share of the total market volume makes the survey an interesting instrument to provide a better understanding of the local solar thermal market. IEO (and its predecessor EC BREC) has been surveying the market’s development since 1995. Among the participating companies are well-known international system suppliers, such as Vaillant, Wolf, Junkers, Ulrich, Viessmann, Stiebel-Eltron, Sonnenkraft and Ariston, as well as Polish manufacturers and distributors, such as Hewalex, Watt, BMK Solar, Projprzemeko, Solar Polska, Energia Odnawialna, Eco-Schubert, Soleko, Solver, Skorut and Immergas. “We guarantee the participating companies to never publish individual sales figures,” Wisniewski explains the success factor of the comprehensive market survey.

Development of the share of vacuum tube collectors
Source: IEO


It´s a mix of different incentive schemes that drives the market in Poland. Whereas private households can profit from incentives in only some of the municipalities, larger solar thermal installations are receiving subsidies from the EkoFundusz Foundation, a country-wide programme. It said to have financed nearly 50 solar installations for PLN 44 million during 2008/2009 (as of the beginning of May 2009). Besides that, EkoFundusz Foundation has already published a list of large installations, which have been and will be implemented in 2009, such as the:
• Housing estate in Łodź, Central Poland, with 69 individual installations and a total surface of more than 7,500 m2
• Hospital in Ełk, north-eastern Poland, with a collector area of 980 m2
• Polish Mother’s Memorial Hospital Research Institute in Łodź with about 3,164 m2
• Zamoyski Housing Co-operation in Zamość, in the northwest of the country, with a planned, active collector area of about 2,400 m2.

In 2009, the EkoFundusz organised the last call for applications in its 9-year history and is going to end its mission in 2010. Nevertheless, it is very likely that new national environmental funds will take its place thereafter.

The 10-page study can be ordered at the Institute for Renewable Energy (IEO).