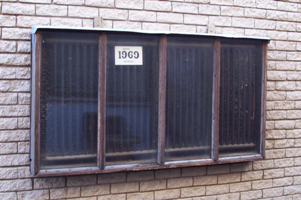 To build an even simpler and cheaper version of the unit, the electrical engineer started experimenting with several design concepts and subsequently developed his own version of a collector panel in 1970. With this design, Gustav Lindenberg started his commercial solar venture under the name Mikado. He joined the International Solar Energy Society (ISES) in the 1970ies and participated in some of its early annual meetings.

The first costumers of Mikado were home owners or farmers, who installed the systems to provide hot water for their farm laborers’ cottages. Larger commercial applications followed, such as the 145 m2 system installed on the roof of the Milnerton High School Hostel in Cape Town in 1978.
Photo: Solardome

“The designs of the first collector and today’s flat plate collectors are still very much the same,” Lindenberg elaborates. The original one had a black copper tubing grid encased in an insulated wooden box, which was then covered with a window glass pane. Although the materials have improved, many of the working principles have stayed the same over the last 40 and more years.

Tertius Lindenberg took over the business from his father in 1995 and renamed the company Solardome SA in 1997. Besides specializing in both solar thermal and photovoltaic systems, the company branched out in 2007 to separately trade with photovoltaic systems under a new company called Sunflare Renewable Systems. Today, both companies together have a staff of 32.

Transporting collector panels in 1980: Gustav Lindenberg, founder of the company Mikado (Pty) Ltd., can be seen on the right. He passed away last year.
Photo: Solardome

As for Solardome SA: “We are one of the few solar companies in South Africa that moved away from installing and now focus solely on production,” Lindenberg says. The company owner still relies on copper as the absorber material, but also uses it for the storage tanks, as it had been done in the company’s early years. The standard copper vessel has since evolved into a patented high pressure copper vessel reinforced by an epoxy vinyl ester/ glass cloth.