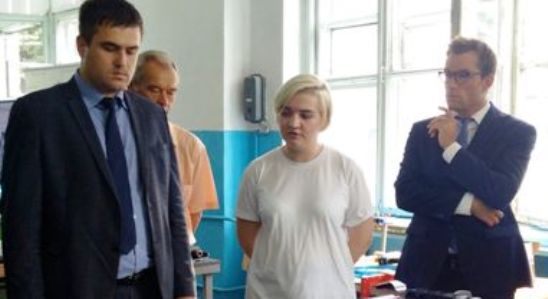 Moldova saw the commissioning of an assembly line for vacuum tube collectors in what used to be the large halls of a manufacturing plant. The owner of the premises is Raut, based in the city of Balti, who repurposed the location after succeeding in the government’s tender invitation at the end of 2016. The line, funded by the Polish government and the United Nations Industrial Development Organization (UNIDO), was implemented based on a technology partnership with Makroterm, a vacuum tube collector assembler from Cracow, Poland. The photo shows Dragos Pidleac, the then Director of Moldova’s Energy Efficiency Agency, and Manuel Mattiat from UNIDO (left and right, respectively, with an interpreter in the middle) during the inauguration.
Photo: UNIDO
The Polish-Moldovan collaboration project was part of an economic mission earlier. From the start, it was clear that it would involve a technology transfer between a Polish solar thermal manufacturer and a Moldovan business.
Called Enhancing local manufacturing capacity of solar thermal energy systems in the Republic of Moldova, its aim has been to build an assembly line for vacuum tube technology at Raut and train local staff. It was funded with a EUR 206,000 grant by the Polish government and EUR 40,000 by UNIDO. The beneficiary, Raut, contributed to the effort by providing the space needed for the production line and the manpower for implementation.
“We heard about the Polish government’s offer to join the technology transfer and applied at UNIDO,” explained Mateusz Wąchała, Project Manager at Makroterm. His company is a national supplier of solar thermal systems based on vacuum tube collectors assembled from double-glass evacuated tubes and U-pipe absorbers for pumped systems. Makroterm purchases the tubes from China and employs a simple assembly process, which is now also used in Moldova. “Assembly is as easy as building a Lego model and can be done by untrained workers,” Wąchała explained.
The Polish-based business delivers all the components – such as vacuum tubes, U-pipe absorbers and insulation for the manifold – to Balti, where Raut assembles the collectors and sells them on the domestic market. According to the World Map of Solar Thermal Industry 2015, Makroterm is a rather small Polish manufacturer, which had sold around 1,500 m² of collector area in 2014 (the latest figure available). The new assembly line is said to have an annual capacity of 1,500 collector units.
Up to 100 solar collectors are expected to be produced at the new Moldovan factory by the end of this year, and output might increase in the next. “The cooperation agreement between Raut and Makroterm also includes the development of sales strategies to increase Raut’s production capacities and reach other end customer groups beyond single-family house owners,” explained Mark Draeck, Industrial Development Officer at UNIDO’s headquarters in Vienna, who oversaw project implementation.
Eugene Gerden, a freelance journalist based in Moscow and specialised in renewable energies, contributed to this article.
Websites of organisations mentioned in this article:
http://www.makroterm.pl/
http://www.unido.org