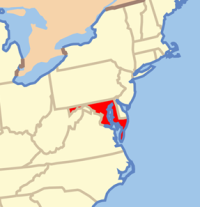 Successful at second try: At the beginning of April, the government of the East Coast state of Maryland approved a bill which makes solar water heating eligible for Solar Renewable Energy Credits (SRECs) under the Renewable Portfolio Standard (RPS). So far, only solar electricity kilowatt-hours were accepted in fulfilling the solar quota of 2 % by 2022. In 2010, a similar bill fell short of success in the House of Delegates. Its passing half a year later came about due to the fervent lobbying efforts by members of the solar thermal sector, such as Rick Peters, President of Maryland-based installation company Solar Energy Services, and Mike Healy, Partner of installation company Skyline Innovations from Washington DC.
Figure: Wikipedia

“A lot of people contributed to this campaign and we also got strong support from the USH2O network members,” Rick Peters said during a conference call of the USH2O utility network on 13 April. From 1 January 2012 on, owners of residential or commercial solar water heating systems will be able to sell SRECs to utilities which will have not fulfilled their solar quota by then. For the system to be eligible, it must be installed after 1 June 2011 and has to measure solar energy output using a specified meter. Further requirements will be announced later this year, because SRECs are based on energy savings, not on energy output. One SREC is issued as soon as 1,000 kWh of energy savings are generated. Similar to Washington DC, OG-300 certified, residential systems do not need meters in Maryland.

This new legislation is a big step forward for the solar thermal sector in the state, because SRECs are traded at much higher prices than common RECs which can be produced by co-generation or biomass, too.

The members of the solar thermal sector had good arguments on their side which convinced the politicians to vote for the modified Renewable Portfolio Standard in broad numbers. The law passed the house in the third reading with 132 to 5 votes on 25 March and the Senate one week later with 46 to 0. The arguments in favour of the bill are documented in the following, as they might also help initiatives in other states to lobby for making solar water heaters eligible for solar quotas of RPS:

Reduced Energy Costs: Solar water heating can often reduce water-heating costs by 70% – 80% annually; this is energy that all households and many businesses use every day.

Solar for All Economic Backgrounds: SRECs for solar water heaters put solar within the reach of Marylanders of all economic backgrounds, including lower-income residents and small businesses who otherwise might not be able to participate in the benefits of solar.

Environmental Benefits: It is estimated that the installation of each residential solar water heating system is equivalent to taking one car off the road.