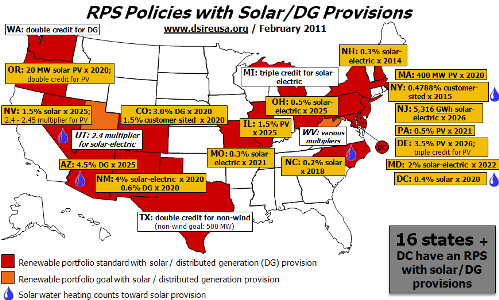 More and more state governments in the USA approve Renewable Portfolio Standards (RPS) with a certain share of solar energy. An RPS requires utilities to retrieve a certain percentage from renewable sources every year. For example, in the District of Columbo (D.C.), utilities will have to get 20 % of their energy from renewable sources, with 0.4 % of that from solar. The map shows all states with an RPS policy including solar or Distributed Generation (DG).
Figure: dsireusa.org

What is so special about the requirements in D.C. and North Carolina? They are the two states which have so far allowed utilities to meet requirements by also buying Solar Renewable Emission Certificates (SRECs) produced by solar water heaters.

This is a great chance for the solar thermal market, since SRECs are traded at a much higher price than renewable RECS, which can be also generated by wind, geothermal or cogeneration plants. The price of SRECs varies from state to state, but prices between USD 250 and 711 are being discussed on the internet – certainly depending on demand and supply. In comparison, RECs from renewables are traded at prices below USD 10 in some states.

“We already have over a hundred owners of solar thermal systems under contract”, says Dan Yonkin, Associate of Sol Systems, an SREC aggregator founded 3 years ago. “Together with local subsidies and the federal tax credits, systems can pay off within two years”.

How are solar thermal SRECs generated? “All eligible residential solar water heating systems must be certified by the OG-300 standard of the Solar Rating and Certification Cooperation (SRCC),” the Washington D.C. Public Service Commission announced in November last year. The OG-300 certificate includes the Solar Energy Factor (SEF), which is a performance rating depending on the system and on the region the system is installed. The SEF can be converted to an equivalent Solar Savings (QSOLAR) through a simple formula given on the SRCC website. QSOLAR is the calculation base of SREC generation. One SREC is issued as soon as 1,000 kWh of eneegy savings are generated. This requirement also counts for commercial solar thermal systems, only that the energy production must be metered – it cannot be estimated through an SRCC rating.

”Thermal SRECs, also called TRECs in North Carolina, are a very important tool, and there seem to be several more states in discussion to approve them,” John Williams, COO of renewable system integrator  Solar Panels Plus, points out. However, some of the solar quotas are still small and will be met very soon. “Some North Carolina utility providers have already slowed down in accepting SRECs, or are offering lower prices, because its demand is fulfilled. The latest price we saw for NC TRECs was through progress heat for a project last June. The price was as small as 58 USD per SRECs,” said Williams. But the good news is that in most states, solar quotas are increasing every year.

Now, strong lobbying by the industry and the associations is needed to convince more state governments to include solar thermal technology in RPS accounting.